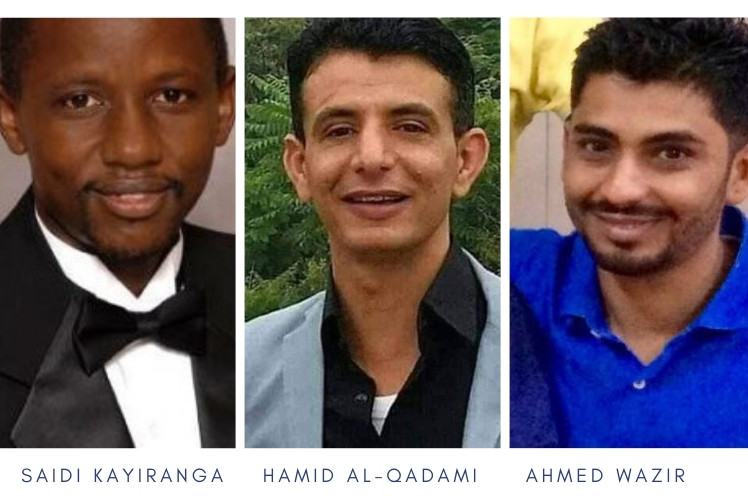 ICRC’s global family was devastated to learn of the deaths of three colleagues after several explosions rocked the airport in Aden, Yemen on 30 December. Hamid Al-Qadami, Ahmed Wazir and Saidi Kayiranga made strong impressions on those they worked alongside with their good humour, dedication to work and interest in helping others. We take a moment to remember our three colleagues for the impact they had on the friends they made.
Article 08 February 2021 Yemen

Known in the Sa'ada sub-delegation for his good-natured manner, Hamid Al-Qadami had been having good fun with his ICRC colleagues right before his flight out to India, asking on a WhatsApp group where he should park his car. One colleague jokingly responded: sell it to a garage for scrap metal. Another suggested parking it at a hotel. A third colleague said it would make a good wheelbarrow.

Hamid responded: I should have known better than to ask this group.

Hamid had been on the cusp of a major life achievement: receiving his PhD from a university in India, a degree he hoped would help him further his work assisting others in Yemen.

Known as the professor to many in the delegation, Hamid had sacrificed for years to earn this advanced degree. Once when he was short on education expenses, he traveled to Jordan to earn money and then continue his studies. He told friends and colleagues that anyone who has a dream can achieve it.

"I saw his optimistic eyes when he told me his story and told others his story that he got through many difficult situations to get his degree," said ICRC colleague Yahya Amer.

Outside of work, Hamid, 41, would tell stories about the beautiful nature and the array of food in India. And he would tell how much work it took to complete his studies.

As an ICRC health field officer in Yemen, he provided needed items to migrants and detainees during assistance missions. Over the last year he worked to support COVID-19 quarantine centres.

"Sometimes after a very long day we would sit together and talk. He was optimistic about his study and he was very proud he was doing his PhD course in India," said Amer.

On weekend breaks, Hamid would drive three hours to return home to visit his family, which included six sons, a fact that surprised some. He appeared too young to have such a large family, said ICRC colleague Basheer Jubran.

The death of Hamid has left many with deflated hearts, given the cruel irony of working amidst the dangers of Yemen only to die on the way out.

"Everyone is missing him, and we are deeply saddened and wounded," said Jubran. "We don't know how to explain what happened to him, and we are praising the memories of him at the sub-delegation whenever we have an occasion."

Always smiling. That's the way people remember Ahmed Wazir. In the ICRC one meets lots of people. But Ahmed may have met the most: As part of the airops team, Ahmed greeted everyone who landed by plane at Aden's airport, and said goodbye when they flew off again.

"He was always receiving the people at the airport with a very nice smile. I hear the same comment from mobile and Yemeni colleagues," said ICRC colleague and friend Rami Ahmed. "So this was a specialty of Ahmed Wazir. He was always smiling, and this is a very good thing, and the people still remind me he's smiling."

At the airport Ahmed Wazir handled logistics that helped bring in goods and personnel.

Another ICRC colleague, Rami Hussein, attended the same college as Ahmed Wazir when he was studying computer science, before later going on to study aviation engineering, which led to his work as an aircraft engineer.

"I've seen that he always dreamt of becoming either a pilot or to be flying. He was also inspired by his uncles who were also members of the crew of Yemenia Airways," said Rami Hussein. "He had two or three members of the family in the same industry. He inherited somehow this from them. He was inspired by them."

The colleagues who have asked about who died in the attack in Yemen were quick to remember Ahmed's smile, Rami Hussein also said. "Because he was always welcoming people with a big smile and he looked happy to get to know new people. He was very, very friendly."

Rami Ahmed first met Ahmed Wazir in 2014, when he was working as an aircraft engineer for a Yemeni airline at the Aden airport. Today the airport has a memorial photograph of Wazir close to where he was killed. The 34-year-old leaves behind two young sons.

Though he was a Rwandan national, his name -- Saidi -- means "happy" in Arabic. And Saidi appeared to be happy when helping others.

He was itching to get into the field in Yemen after spending two weeks in COVID-19 quarantine upon arrival. He was so eager, in fact, that he asked to stay longer to have more time to carry out his assessment at two hospitals.

Passionate about his job and keen to share his assessment, his work revealed shortcomings in two departments and he offered pragmatic solutions, said Avril Patterson, the health coordinator in Yemen.

"He also really wanted to come back to Yemen, as he saw needs that he could help address with training," Avril said. "Saidi came to us as an X-ray technician but he was so clearly also a humanitarian. He was worried not only about the machine or even the staff but about the patients ... He may only have been here a short time, but his work will continue."

Described as lovable and kind, Saidi often spoke about his family. He had special praise for his wife, on her big influence on his life and her support for his life plans, said Raphael Kerio, an ortho-prosthetist in Yemen.

Saidi was devastated that due to COVID-19 lockdowns he couldn't join his wife in the delivery room for the recent birth of his second daughter, but when baby Astra-Allen finally arrived the father cried tears of joy, said Faith Mbijiwe, the administrator at Yemen's Bajil Rural Hospital.

"We shared her first moments into this world through a video call with her lovely mother from her hospital bed. ... You so loved your wife and daughter that a day never passed without you talking about them and you looked forward to visiting them soon," said Faith.

Jonathan Delchambre, an ICRC biomedical engineer delegate, remembers how Saidi was "fully dedicated to the training and improvement of the radiology department in this hospital. While it was not always easy to work in this hospital, Saidi always managed to overcome challenges in a very diplomatic way."

Younis Elshalwi was at the delegation in Sana'a saying goodbye to the staff leaving for the airport and helped Saidi with his bags, trading jokes with him until the last moment.

"I was telling him, 'Saidi, are you Saidi to leave us?" Younis recalled. "Saidi means happy in Arabic. Saidi was very happy to learn that the issue he had identified of x-ray in Bajil was being tackled very promptly as per his recommendations - and he felt some sort of achievement. As I was shutting the door of the ICRC bus, Saidi was giving me a two-hand gesture of thank you with his little shy and discreet smile."