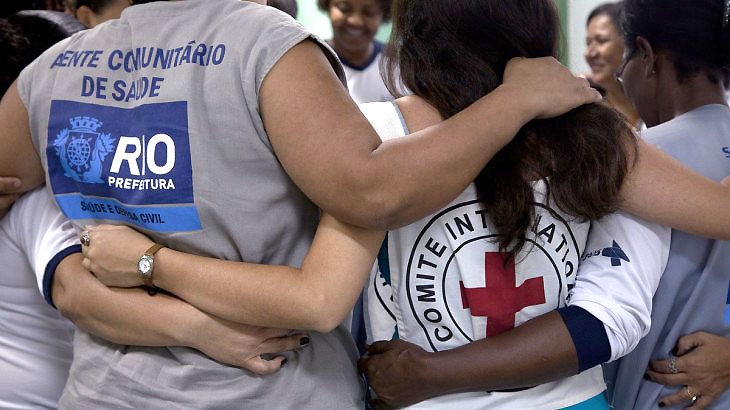 The Rio Project, carried out between 2009 and 2013, comprised a set of ICRC initiatives in partnership with Brazilian governmental agencies, neighbourhood associations and the Brazilian Red Cross (BRC) to mitigate the humanitarian consequences of armed violence.

The experience resulted in integrated action related to health promotion and education that seek to protect the population and develop the resilience of those who live and/or work in favelas in Rio de Janeiro. In places where the State and its structures are still in operation, the ICRC adapts its experience and works in support of local authorities, rather than replace them in the provision of basic services, and supports increased State action. In the case of Rio, some of these initiatives have become public policy.

At the request of local governments, some of the methodologies developed during the Rio Project are being replicated in 12 cities across Brazil, in other Latin American countries and other continents.

The Safer Access programme was designed to reduce and prevent the impact of violence on health professionals working on primary care and residents of favelas in Rio de Janeiro, and to facilitate access to basic public health services by this population. The staff learned to adopt self-protection measures and security protocols for emergencies.

The Mental Health and Violence programme empowered residents and health workers to cope with the emotional and psychological issues that arise out of violence in communities. The programme was developed in partnership with the Rio de Janeiro Municipal Secretariat for Health (SMS).

The first aid programme was run with the BRC and trained the residents of Rio's favelas in basic first aid so they could give first aid until specialized help arrived.

The creating humanitarian spaces programme focused on violence and its impact on schools. Activities for high schools promoted discussions on humanitarian principles.

The safer behaviour programme sought to reduce and prevent the impact of violence on education workers, school students and their families. They learned to adopt self-protection measures and security protocols. The programme was developed in partnership with the Rio de Janeiro Municipal Secretariat of Education (Seeduc).

More about the Rio Project (in Portuguese):