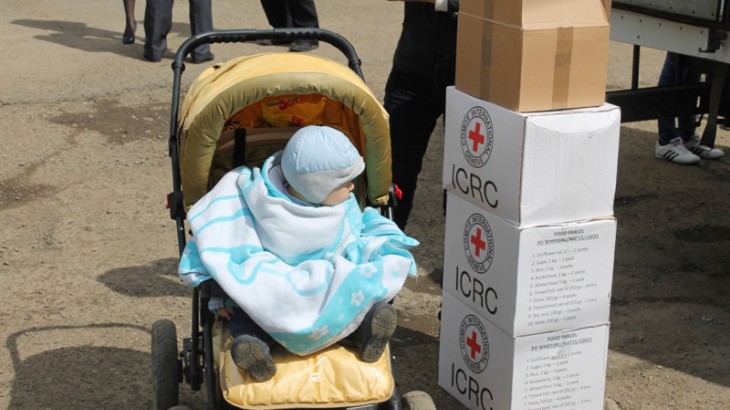 Geneva/Мoscow, 10 April 2015 – The second phase of humanitarian assistance to displaced civilians from eastern Ukraine has started in the Rostov Region. The International Committee of the Red Cross (ICRC) has handed over to the local branch of the Russian Red Cross food parcels and hygiene materials for further distribution. In April alone, 12,000 displaced people will receive them. The ICRC will deliver similar aid every month.

Tens of thousands of people who fled hostilities in eastern Ukraine found refuge in the south of Russia. Many are in need of such basic items as food, clothing and hygiene materials. "These people often stay with relatives and friends, but the resources of their hosts are limited," said the head of the ICRC Regional Delegation in Moscow, Pascal Cuttat. "This is where the ICRC comes in, providing assistance in cooperation with branches of the Russian Red Cross and complementing the efforts of local authorities."

The ICRC, supported by the local authorities, has also launched a public awareness campaign on the dangers of mines and unexploded ordnance in eastern Ukraine.

In addition to relief efforts, the ICRC, together with the Russian Red Cross Tracing and Information Centre, is helping to restore contact between family members, separated as a result of the conflict.