Russian Federation: Knowing IHL is the first step towards applying it 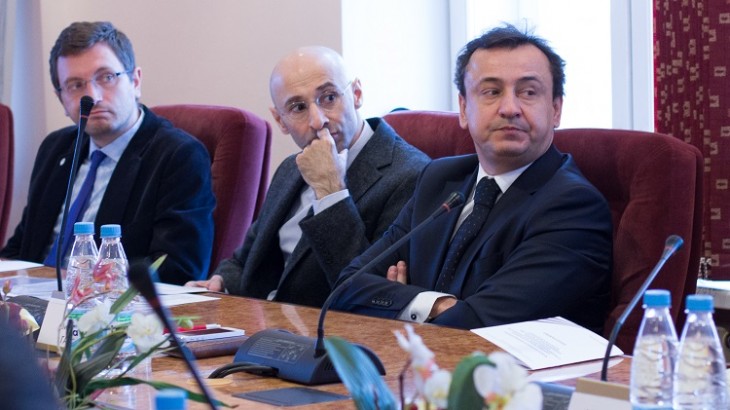 A conference on the future of international humanitarian law and the prospects for teaching it in Russia, Belarus and Moldova took place on 25 November 2015 in Moscow. The event was organized by the International Law Department of Kutafin Moscow State Law University with the support of the ICRC.

Technology has brought new means and methods of warfare, while changes in the nature of conflict and the increasing prevalence of military operations in urban areas make it necessary to clarify the existing rules and formulate recommendations for their application.

Participants pointed out that it can be difficult to decide what constitutes a military objective in the context of urban warfare. There was also a focus on the need to enhance protection of the environment, which suffers significant damage in war. Other topics included the responsibility of organized armed groups for ensuring respect for human rights during armed conflicts and the status of internees.

The law of armed conflict requires explanation in today's contexts. Academic circles and specialists have a role to play in resolving issues in this area.

"At the ICRC, we strongly believe that international humanitarian law is being developed not only in accordance with post-conflict "reactive" scenarios, but also in line with academic, preventive concepts, based on new interpretations, views and assessments put forward by academics," said Pascal Cuttat, who heads the ICRC's regional delegation for the Russian Federation, Belarus and Moldova.

Violations of IHL hit the headlines almost daily. Knowing the law is the first step towards complying with it. Teaching the law of armed conflict is therefore an important element of current discussions about the need for these rules to be respected.

Etienne Kuster, ICRC adviser for relations with academic circles, described it as a "wrong calculation" when universities drop IHL from their curricula, and he spoke of the need to ensure that regional expertise in IHL is passed on to the next generation.

The findings of the conference enabled the participants to formulate recommendations that are expected to give further impetus to the teaching of IHL in universities.