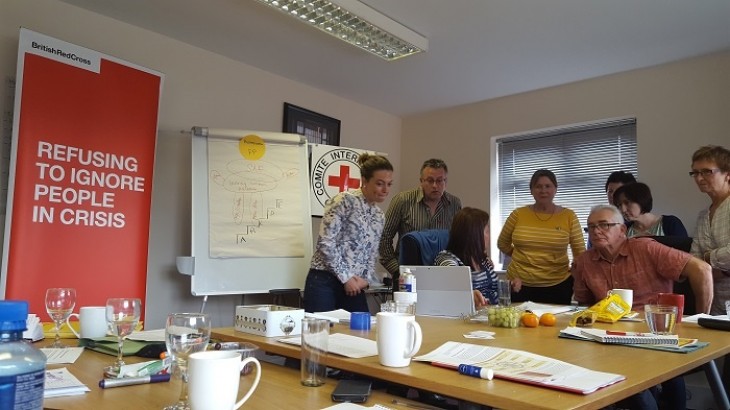 In August 2016, staff from the International Committee of the Red Cross (ICRC) office in Northern Ireland and their counterparts from the Northern Ireland branch of the British Red Cross (BRC), participated in the first joint training on Safer Access; a course which aims to ensure the safe delivery of humanitarian assistance in violence-affected communities.

Despite the signing of a peace agreement in 1998 (Good Friday Agreement – GFA)  and the subsequent peace process,  incidents of violence in some parts of Northern Ireland remains a concern.  The joint training reflected growing cooperation between the British Red Cross and the ICRC, which has had a permanent office in Belfast since 2011. "Communal violence is still a problem in some parts of Northern Ireland and there are palpable tensions between and within communities," said Catherine Martin, ICRC  National Society Capacity Building Support Advisor. "It is important that both ICRC and BRC colleagues are able to position themselves to gain and maintain access, acceptance and security with all communities and all those that we work with."

"While the British Red Cross generally enjoys wide acceptance, the perceived association in our name to Great Britain, could restrict our access to some of the most vulnerable,"explained Sean O'Boyle, BRC's Principles in Action Manager in Northern Ireland.  "Through the SAF, the British Red Cross in Northern Ireland is working closely with the ICRC to increase our acceptance with all communities we want to help."

"The Safer Access training helps National Societies who face complex challenges when responding in sensitive and insecure contexts, including armed conflict and internal disturbances and tensions, to access victims safely – both for civilians and for staff and volunteers" said ICRC programme officer Anne Molloy whose work involves supporting a community-based organisations (CBOs) which mediate to prevent so-called 'punishment attacks' from paramilitary organizations. "The training, particularly the role plays and scenario building, was really useful in helping us better plan to mitigate risk and to understand how our humanitarian actions, or inaction, can create a positive or negative perception within the communities we work in. We also hope to bring the Safer Access Framework tool to the CBOs to assist them in planning safer access."

The Safer Access Framework (SAF), first developed in 2003 was recently updated based on the experiences of  Red Cross Red Crescent National Societies. It contains a set of preparedness actions and acceptance measures, grounded in the Fundamental Principles of the International Red Cross and Red Crescent Movement and other Movement policies that a National Society can take when responding in sensitive and insecure contexts.