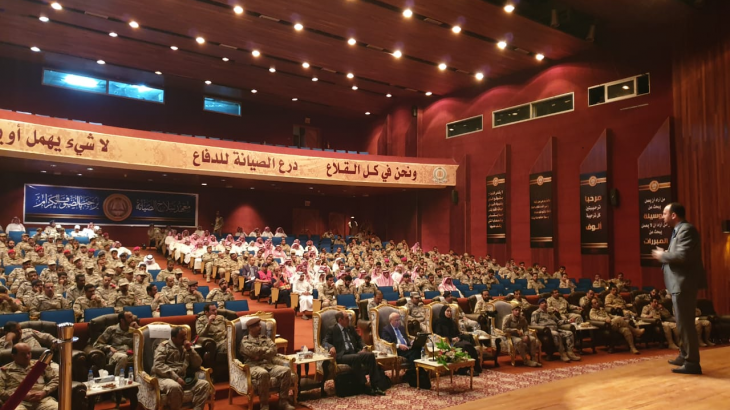 Kuwait City (ICRC) –  From 14 to 18 April, a high-level workshop on international humanitarian law (IHL) organized jointly by the International Committee of the Red Cross (ICRC), the Ministry of Defense and the Human Rights Commission reached more than 1,200 military personnel from the military base of Taif, in the west of Saudi Arabia.

"This workshop supports the efforts of the Saudi armed forces to enhance their knowledge of IHL – the law applicable in times of armed conflict – and the principles of humanitarian action," said John Strick van Linschoten, the ICRC’s head of mission in Saudi Arabia. "It is a unique opportunity for participants from all levels of the armed forces to discuss topics related to the humanitarian consequences of military operations and the protection of civilians with experts and peers, and share experiences."

Other topics covered during the five-day session included IHL and Islam, mechanisms to detect IHL violations, the role of the military commander, contemporary challenges to IHL and humanitarian action, the role of the National Committee of International Humanitarian Law, IHL and peace operations, implementation of IHL, preventive and monitoring mechanisms and the IHL sanction regime. The participants also learned about the ICRC’s activities aimed at enhancing the protection of civilians, its working modalities with regard to visits to detainees, and its role as a neutral intermediary in armed conflict situations.

"The Ministry of Defence of Saudi Arabia teaches IHL as part of the curriculum to students of the military colleges of the armed forces since it was established. It is also taught as a separate foundational and advanced course to officers and non-commissioned officers and all those undertaking their military service," said Lt Col. Ibrahim bin Saad Al Haider from the Education and Training Unit of the Ministry of Defence in Riyadh.

The workshop, based on an initiative by the Human Rights Commission and the Education and Training Unit of the Ministry of Defence in Riyadh, was supported by experts from Saudi governmental and military bodies along with a team of ICRC staff with expertise in relations with armed forces, international humanitarian law, and protection.

Previous sessions of this workshop were held in 2018 in Hafr Al Baten, Kharj, Riyadh and Tabuk.

The ICRC is formally entrusted under the Geneva Conventions and their Additional Protocols with protecting the victims of armed conflict and with promoting international humanitarian law. As an integral part of its operations worldwide, the ICRC maintains a constructive dialogue with the armed and security forces. In Saudi Arabia, the ICRC has been working closely with the Ministry of Defense and the armed forces to strengthen their knowledge of the laws of war.