The critical challenges of migration and displacement 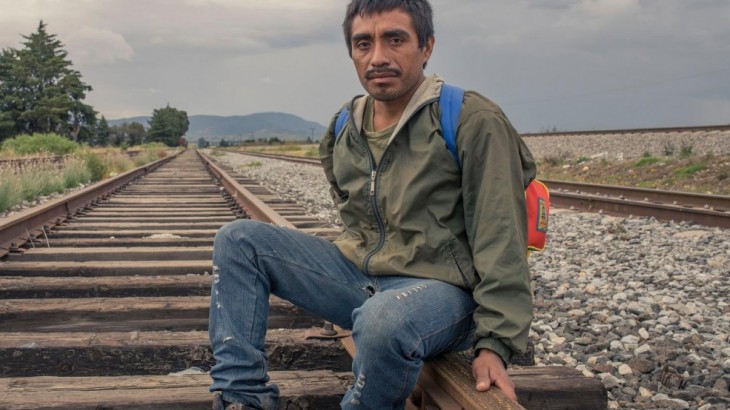 Ciudad Serdán, Puebla, Mexico: Magdaleno has been travelling by train and bus for two weeks. He has a wife and three children at home. He's making for the United States, where his brother lives. He was sad to leave but says that poverty drove him to leave.

Migration and internal displacement are among the most pressing topics on the international agenda today. In my meeting with leaders from across the international community, from governments and business, and migration is one of the most frequent topics of conversation.

While worldwide more than 250 million people live outside their home country, it is the estimated 65 million people who have been displaced by violence and conflict and those who are forced by other circumstances to choose irregular pathways of migration often outside legal frameworks foreseen for migration that represent a population of particular concern.

Of the 65 million people displaced by violence and war, just over 20 million are refugees, while the remaining majority are displaced in their own countries, often more than once.

This region, Mexico and Central America, is no exception. One of the major flows of migrants happens right here and in particular in the Northern Triangle. The link between the root causes, the basic drivers and actual migration are rather complex; migration happens due to a series of factors and mixed migration happens as a consequence of inequalities in welfare and security and often happens in more than one way.

Often, policies trying to reduce migration have an adverse effect. Migration flows, displacements by violence and other pressures on a dignified life, are creating vulnerabilities of great concern for the ICRC and the Red Cross Red Crescent Movement as a whole. ICRC's mandate is to protect and assist people affected by armed conflict and other situations of violence. People being forced to move by violence and insecurity – be it related to armed conflict or other drivers of violence – is a critical humanitarian priority.

Through its delegations in almost 100 countries the ICRC is present at the places of origin of many migrants and internally displaced persons. The ICRC has a fairly accurate understanding of the needs arising in all phases of displacement and together with Movement partners can tailor its response to the specific needs of each context.

The ICRC works in close proximity to the people concerned, whether they are IDPs, refugees or migrants who have crossed the border into a foreign country . This work is regularly carried out in cooperation with the local national society of the Red Cross or the Red Crescent, and sometimes other partner institutions such as the UNHCR.

The reasons why people decide to migrate are multiple and complex. They include the absence of employment opportunities in their countries of origin, the scarcity of health and education services, or the desire to reunite with family members already in other countries: they are a combination of choice and constraints. But we cannot overlook that armed conflict and other situations of violence are major drivers forcing people to leave their homes. Whatever the motives, mixed population flows are the result and a phenomenon, which challenges policy making today.

The situation is exacerbated when laws are violated. If international humanitarian laws were fully respected in armed conflict, people would be much less exposed to the humanitarian consequences they invariably face.

Respecting the law would go a long way in preventing people from having to leave their homes in the first place. And it would dramatically reduce the plight encountered by those who have left. Respecting and ensuring respect of the law are essential for addressing a root cause of the human cost generated by forced displacement.

Once on their journey, migrants and IDPs face multiple risks and high degrees of vulnerability. When they reach their destination they often face difficulties in accessing health care, housing, education or employment. They may become easy targets for abuse, extortion and exploitation due to a lack of a protective family network, a lack of information or missing documents. Many suffer accidents or illness and cannot benefit from medical care. Some lose contact with their families. Thousands die or disappear along the way every year. Many are held in prolonged detention for having entered or stayed irregularly in a foreign country, in disregard of the fact that detention should always be an exceptional measure of last resort and limited in time.

Concerns in Mexico and Central America

In Mexico and Central America, the ICRC together with Red Cross National Societies, work to prevent and mitigate these consequences.

We provide direct assistance along the migratory routes, including food and water, medical assistance and information about potential hazards along the journey. People can also receive support to contact their families.

Maintaining family links is crucial. For every missing migrant, there is a family living in uncertainty ‒ not knowing if their relative is dead or alive. Alongside the emotional turmoil linked to the disappearance and to the search, missing migrants' families can face numerous practical challenges that put their daily life on hold. This is an invisible but very painful humanitarian consequence of migration.

The ICRC's work furthermore involves support given to shelters, including in the form of rehabilitating infrastructure, so that living conditions of migrants staying there are dignified, as well as specific support to strengthen their understanding of the needs of migrant persons and in consequence their networking and routes of attention for these persons.

Another line of work consists of providing assistance to migrants who were severely wounded and are in need of artificial limbs or other devices they can receive from the Mexican Red Cross Society in centers supported by the ICRC.

The ICRC also visits places where migrants are being detained. We aim to ensure people's treatment and their living conditions are compliant with international law and standards. Particular attention is given to preventing children from being detained.

At an institutional level, ICRC's frontline work with migrants is complemented by efforts to ensure legal frameworks and policies comply with requirements stemming from international law, to guarantee dignity and safety, and reduce and prevent suffering. ICRC works with governments and parliaments to ensure legislative frameworks, policies and practice are in conformity with international law.

Similar approaches are taken with respect to internally displaced persons. In some situations, there is indeed a continuum between internal displacement and migration.

For some people, internal displacement may only be a first stage in further movement as they may be driven to continue their journey to a foreign country, if, for example they are unable to find protection inside their own country. In such situations, the challenges posed by internal displacement and migration may be connected.

Whatever the legal classification in which people displaced fall, the fundamental point is that they are protected from abuse and have their humanitarian needs met. We must start first by asking 'what are the humanitarian needs and vulnerabilities?' and then applying a generous interpretation of the relevant protection regime. This requires the international community and others involved to adopting a holistic and coordinated approach that maximizes protection for both IDPs and migrants.

Let me add a few thoughts about our work related to the Global Compact for Safe, Regular and Orderly Migration. Today this is one of the most ambitious endeavours to make a difference in the situation of migrants. The idea of the compact was supported by 193 States in the New York Declaration of 2016 and is a promising undertaking.

The ICRC is closely following the development of this new instrument, which should be adopted in September 2018. From our perspective, there are in particular three issues to watch for.

In conclusion, it is essential to have an appreciation for the complicated origins of migration: poverty, injustice, exclusion, armed conflict, violence, among others.

In the face of this reality, no country on their own can propose durable solutions and seek effective measures in accordance with national and international law that can respect for the rights of migrants and mitigate the undesirable humanitarian consequences of migration.

It is a critical public problem that requires coordinated and ambitious solutions at local, regional and global levels. This is why there needs to be a collaborative approach among States aimed at the well-being of individuals, and not to deter migration and punish those who decide to leave their communities. Security concerns must be balanced against humanitarian considerations.

We are hopeful that the Global Compact for Safe, Orderly and Regular Migration can strengthen the commitments of the 2016 Declaration, and provide a more predictable and humane response to the needs of people on the move everywhere. With this in mind, the ICRC and its partners in the Red Cross and Red Crescent Movement will remain engaged in this important process.

We also remain committed to contributing to the development of the Global Compact on Refugees, working with UNHCR who is entrusted with producing a draft.

There is certainly much work to do in the coming months. The two compacts may well be a turning point in how effectively States and the wider international community address the humanitarian consequences related to migration, refugees and IDPs.