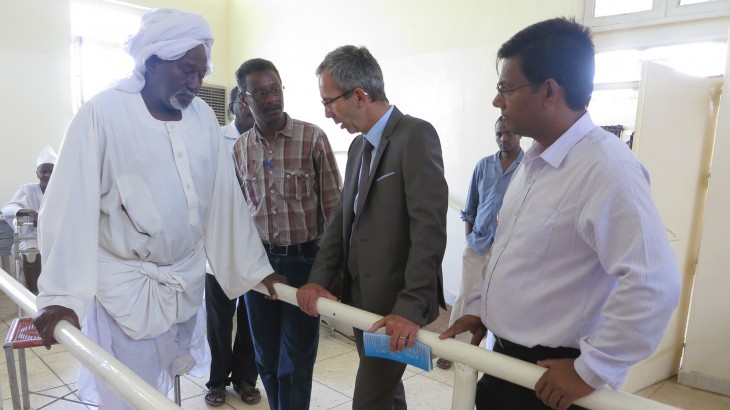 Sudan, 16 September 2015. The ICRC's director of operations Dominik Stillhart with a patient and staff during a visit to the National Authority for Prosthetics and Orthotics centre in Khartoum. CC BY-NC-ND / ICRC / Asia Kambal

Khartoum (ICRC) - Dominik Stillhart, the director of operations at the International Committee of the Red Cross (ICRC), today concluded a visit to Sudan where he discussed the scope of the ICRC's humanitarian work with government representatives and the Sudanese Red Crescent Society.

The suspension of the ICRC's activities in the country was lifted at the end of 2014, allowing the organization to deliver emergency assistance to over a quarter of a million people in Darfur in the first half of 2015. The ICRC has provided those in need with medical help, drinking water, farming implements and seeds. The organization also maintains its support for the physical rehabilitation programme at the National Authority for Prosthetics and Orthotics and continues to offer its services as a neutral intermediary. It recently facilitated the handover of 18 detainees released in Darfur.

"Our commitment to helping people in Sudan affected by the violence on all sides remains firm and unchanged. We stand ready to step up the delivery of food and other essential items, drinking water and medical care in conflict-affected areas," said Mr Stillhart. "In this respect, we are encouraged by the positive message we received during our meetings with the Sudanese authorities this week."

During his visit to Sudan, Mr Stillhart met with the president of the Sudanese Red Crescent, the Humanitarian Aid Commissioner, as well as with officials from the Ministry of Foreign Affairs and the Ministry of Welfare and Social Security.

The ICRC began working in Sudan in 1978, expanding its operations to include Darfur in 2003. The organization currently provides assistance to people in Darfur suffering from the effects of armed conflict and other situations of violence.