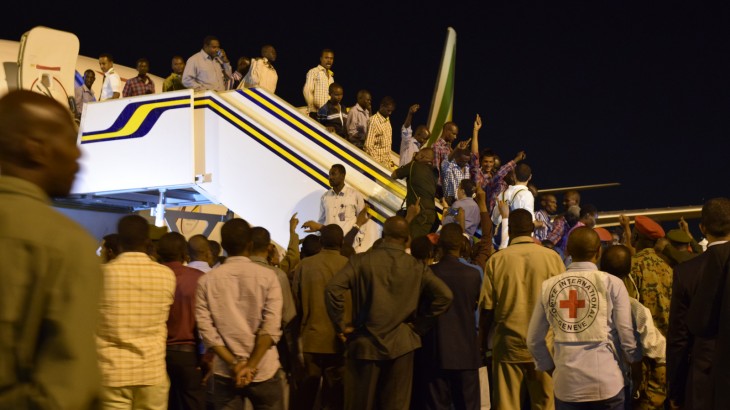 Khartoum/ Kampala/ Juba (ICRC) – The International Committee of the Red Cross (ICRC) has facilitated the release and repatriation of 125 people detained by the Sudan People's Liberation Movement-North (SPLM-N). The ICRC transported the released persons from two locations in South Sudan to Entebbe in Uganda and onward to Sudan, where they were handed over to government officials in Khartoum. The operation followed a request by the authorities in Kampala, Khartoum and Juba, and the SPLM-N, with agreement by all those involved.

"We are very pleased that these people will finally return to their families," said ICRC's head of delegation in Sudan, Gérard Peytrignet. "Acting as a neutral intermediary is central to our mandate, and we stand ready to provide this humanitarian service when asked by all those involved in a conflict."

ICRC teams accompanied the released people throughout the journey from South Sudan to Khartoum via Uganda. Prior to the repatriation, the ICRC interviewed all the detainees to ensure that they wanted to return to Khartoum. Medical checks were conducted at the same time to confirm their fitness to travel. The entire transfer operation took place over four days and was concluded on Sunday 5 March.

Mr Peytrignet said: "Because of the regular dialogue we maintain with all parties involved in conflict, the ICRC was asked to conduct this operation and fulfil its role of a neutral intermediary. We are very glad, as these efforts have been a success. Similar operations were conducted in the past in Sudan and the wider region."