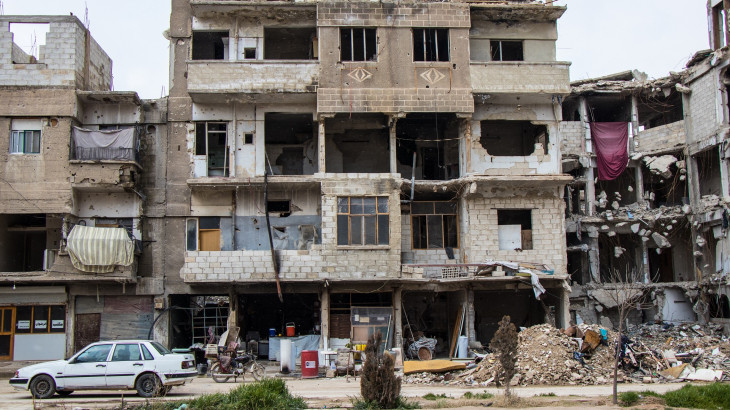 As the tenth anniversary of the Syria conflict approaches, millions of people are being pushed towards deeper poverty and hunger. Harasta, rural Damascus. Ammar SABBOH / ICRC

Damascus/Geneva (ICRC) - A dramatically deteriorating economic situation, the impact of expanded sanctions, a simmering COVID-19 crisis and ongoing fighting in parts of the country are pushing millions of people in Syria towards deeper poverty and hunger as the tenth anniversary of the conflict approaches.

The humanitarian needs across the entire country are already immense and rising at a pace that threatens to outstrip and even overwhelm existing capacities to respond, exacerbated by the worst economic crisis since the conflict began.

“These last months have been an economic nightmare for Syrians on top of almost a decade of brutal and unrelenting conflict. At a conservative estimate, there are hundreds of thousands of newly vulnerable people being pushed towards poverty and hunger. The ICRC, together with the Syrian Arab Red Crescent will be stepping up our help, including to the most fragile groups,” said Philip Spoerri, head of the International Committee of the Red Cross’ delegation in Damascus, Syria.

Months of financial turmoil in neighbouring Lebanon and the impact of the coronavirus pandemic and measures to stem its spread have seen prices soar and the Syrian pound plunge, with a devastating domino effect on people’s jobs and income. Almost 90 per cent of households contacted by ICRC recently reported losing employment or revenue in past months, with 70 per cent having no savings to tide themselves over.

The economic crisis is unfolding against a backdrop of deep humanitarian needs across the entire country, including active frontlines with daily civilian casualties; tens of thousands of people detained, missing or unaccounted for; families separated, women and children stranded in camps; cities, schools and hospitals devastated, and a population exhausted by repeated mass displacement and constant struggle for survival.

More than ever, people throughout the country need impartial humanitarian aid, based on an assessment of needs on the ground and delivered in an independent manner.

“We urgently need sustained, non-politicized access from all those involved in the conflict; the lack of it is costing lives every day,” said Fabrizio Carboni, the ICRC regional director for the Near and Middle East.

“The Idlib pocket is an example of an acute, ongoing crisis where ICRC needs access in order to step up action with our Movement partners. Syrians should not be held hostage by political differences and deadly delays in delivering life-saving aid,” he said.

Like millions of people across Syria, it’s thought half of the estimated four million people in Idlib pocket are displaced, many of them repeatedly so over the years. Inside Syria, the number of displaced is at least six million. Many millions more live in neighbouring countries and further afield.

The fate and future of those who return from displacement are of great concern. Around 500,000 people from inside and outside Syria have returned to their homes over the past 12 months, braving enormous challenges and dangers like weapon-contaminated land and destroyed infrastructure to try to rebuild their lives and communities. They must be supported as part of broader support for sustainable rebuilding across the country.

1 in 2 health care facilities are damaged.

Over 1 in 2 people need aid to survive. pic.twitter.com/MkEbQLEysz

The fate of those whose families are still waiting for them to return is another critical issue in Syria today. For the tens of thousands of families that have a missing relative, rebuilding lives will be particularly difficult. Besides the anguish of not knowing the fate and whereabouts of their relatives, families are also dealing with additional economic, administrative, legal, psychological and psychosocial needs as a result of disappearances.

Only a robust response from the international community, parties to the conflict and humanitarian groups can answer families’ needs, including their right to know what has happened to their loved one.

Together with the Syrian Arab Red Crescent and other Movement partners, the ICRC will step up its response in Syria in the coming months, supporting vulnerable groups from the worst aftershocks of the economic crisis as well as maintaining and increasing life-saving core operations.

These include carrying out urgent repairs to critical water infrastructure, distributing food and daily hot meals to those in need, and supporting health-care services in communities and in camps.

Latest footage and results of ICRC economic impact polling are on ICRC Newsroom.

1. In May 2020, ICRC’s Economic Security Unit in Syria interviewed 125 households that had been previously supported by the ICRC, representing 875 people, about the economic impact of COVID-19. Market price monitoring was carried out in March and April.

2. The International Committee of the Red Cross is an independent, neutral organization ensuring humanitarian protection and assistance for victims of armed conflict and other situations of violence. It acts in response to emergencies and at the same time promotes respect for international humanitarian law and its implementation in national law.

To find out what the ICRC is doing to put an end to attacks on health workers and patients, go to www.healthcareindanger.org