Syria: Over 450 people including injured evacuated from hard to reach and besieged towns 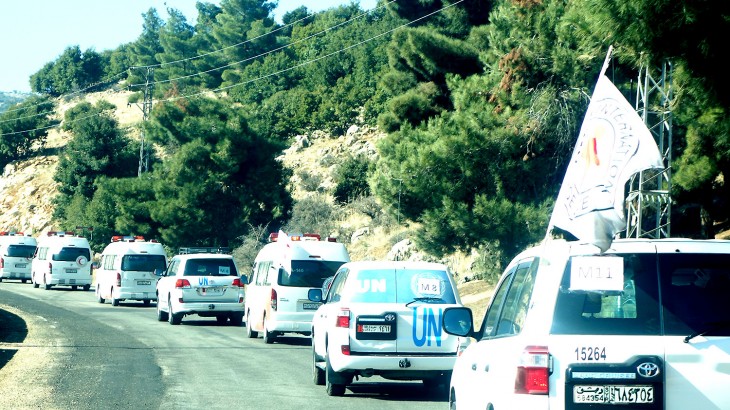 On the road to the Lebanese border. CC BY-NC-ND / ICRC / A. Alkhatib

Joint Press Release. The United Nations in Syria, the Syrian Arab Red Crescent and the International Committee of the Red Cross  on the evacuation of injured people and relatives in Syria's Idleb and Rif Damascus governorates.

(Damascus, 28 December 2015) The United Nations (UN) in Syria, in partnership with the Syrian Arab Red Crescent (SARC), and the International Committee of the Red Cross (ICRC) have successfully facilitated the evacuation of more than 450 people including the injured and their accompanying family members, following a local Agreement concerning the Syrian towns of Foua, Kafraya in Idleb and Zabadani and Madaya in Rif Damascus.

While the United Nations, ICRC, SARC and all humanitarian partners are not party to the Agreement, the humanitarian actors are keen to see its provisions implemented as people in these towns live in a difficult situation, and the injured people urgently need medical assistance. 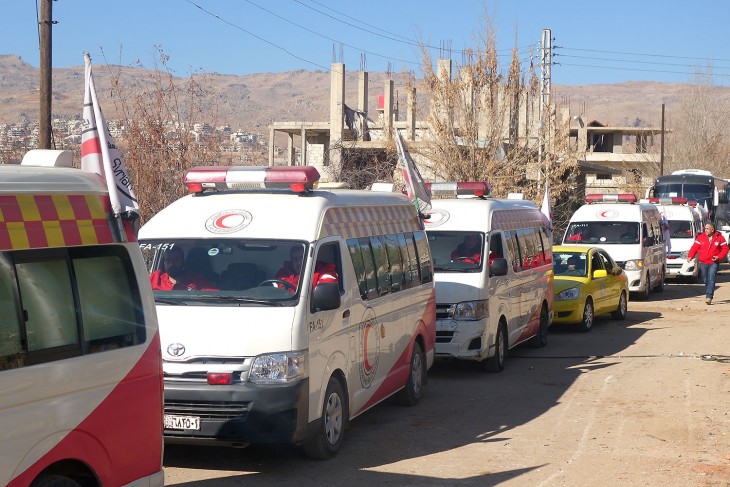 In the city of Zabadani. CC BY-NC-ND / ICRC / A. Alkhatib

Earlier today, the UN in Syria, SARC and ICRC carried out coordinated tasks, which led to the evacuation of 338 persons from the towns of Foua and Kafraya, and 126 people from the towns of Zabadani and Madaya. They were simultaneously evacuated by land and air through Turkey and Lebanon to the agreed final destinations where those requiring longer term medical care will receive it.

Through the facilitation of the UN, SARC and ICRC in Syria, and in close coordination with the ICRC in Lebanon, the Lebanese Red Cross, the UN in Turkey and Lebanon and IHH Humanitarian Relief Foundation, an NGO partner in Turkey, the injured were transported out of Syria to Lebanon where thorough medical checks were conducted and urgent medical assistance was provided.

"The humanitarian community in Syria is keen to see the swift implementation of the next phases of the Four Towns Agreement including humanitarian access to people in these towns," said Yacoub El-Hillo, UN Resident and Humanitarian Coordinator in Syria. "We stand ready to continue providing relief and livelihoods assistance to the millions of people wherever they are in Syria as they bear the brunt of this crisis," El Hillo added.

"Today's humanitarian action shows that even in the middle of fierce conflicts, agreements can be reached, solely for the purpose of alleviating human suffering," said Marianne Gasser, Head of the ICRC Delegation in Syria. "Parties involved in the fighting, must allow access by humanitarian actors to all people who have been affected by years of fighting, especially to those in besieged and hard to reach areas, "she continued.

Dr Abdul Rahman Attar, the President of the SARC said: "Access to medical care is a right of every wounded person regardless of which side they belong to. SARC's teams of volunteers, first-aiders and ambulances were heavily involved in the various stages of this operation inside Syria."

On his side, the UN Special Envoy for Syria Staffan de Mistura said that the UN's clear goal is to reach, as soon as possible a nationwide ceasefire. "Meanwhile, initiatives like this one bring relief to besieged or isolated communities and have great value," de Mistura said. "They help the perception that a nationwide ceasefire brokered by the members of the International Syria Support Group is doable and that the UN can and will do its part."

Across Syria, around 4.5 million people living in hard-to-reach areas continue with limited access to basic life-saving assistance and protection. Almost 400,000 of them live in besieged areas with little or no access to basic supplies or assistance. The United Nations, ICRC, SARC and all humanitarian partners continue to urge all parties to the conflict to find a political solution, and to ensure unimpeded and sustained humanitarian access.

Read the latest Syria news and info from our Syrian cities page.