Talking about the laws of war in a peaceful Pacific 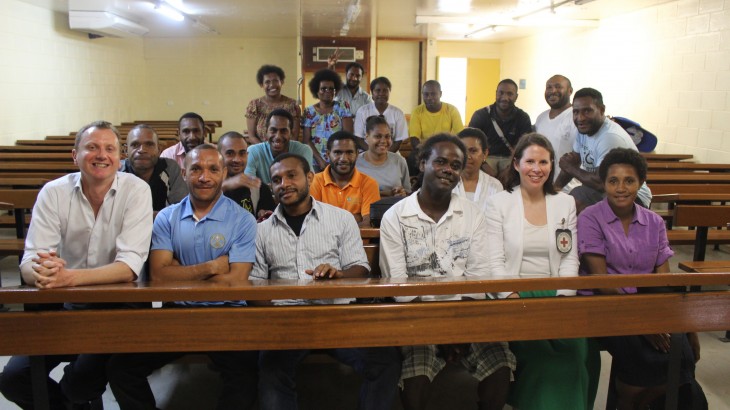 While currently known as a relatively stable part of the world, the Pacific is no stranger to the devastating impacts of conflict. In recent decades both the Solomon Islands and the Autonomous Region of Bougainville have experienced internal strife, while communities in the PNG Highlands continue to deal with the humanitarian consequences of inter-tribal violence.

These conflicts illustrate the necessity for all countries in all regions – whether at peace or war – to know and support the humanitarian laws designed to put limits on warfare.

For the past three and a half years, Netta Goussac, the ICRC's outgoing legal advisor to the Pacific, has helped increase awareness of international humanitarian law (IHL) across the Pacific, working with governments in countries ranging from Papua New Guinea to Australia to the small island nation of Kiribati.

A former government lawyer, she played a significant role in promoting the ratification and implementation of the Geneva Conventions, its Additional Protocols and other IHL treaties among Pacific Island nations.

Despite the relative peace in the region, Ms Goussac said it's critical that the rules regulating warfare are implemented into domestic legislation: "Efforts to promote the rules that protect civilians in war continue to be important, despite the absence of conflict in the region," she said.

During her time in the region, Ms Goussac assisted Pacific Island nations to reach a number of milestones in terms of IHL.

Earlier this year saw the formation of PNG's national IHL committee, which provides a permanent platform for members to discuss the country's participation in IHL treaties and the local implementation of these laws.

Also, in July, many Pacific States participated in the process to draft and adopt the Treaty on the Prohibition of Nuclear Weapons. This landmark international agreement makes clear that any development, production testing, stockpiling, use or threat to use nuclear weapons is completely unacceptable.

"This as an historic achievement for the Pacific, a region which has suffered from the effects of nuclear testing," Ms Goussac said.

Later in 2017, the ICRC will also co-host the inaugural Pacific Roundtable on IHL, which for the first time provides a dedicated forum for discussions on the laws of war and their importance in the region.

Ms Goussac said she leaves the Pacific with fond memories: "I worked with some of the most passionate, intelligent and dedicated government lawyers in the region," she said. "No matter what language we speak, we share a universal 'language of the law' and a common commitment to uphold the rules of war."