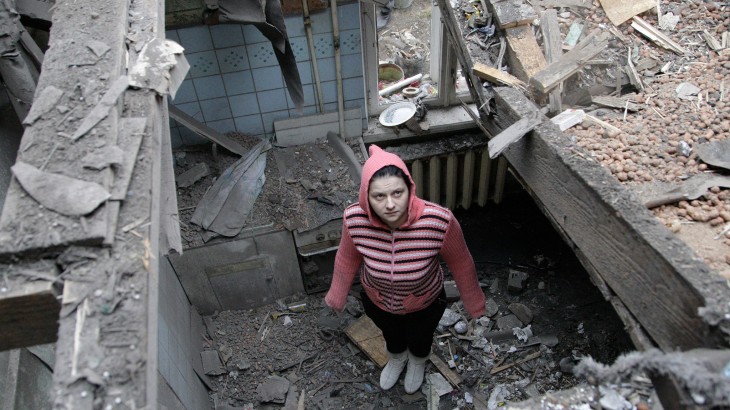 Heavy shelling of residential areas in Donetsk and towns like Debaltsevo has continued over the weekend. Despite dangerous conditions, teams from the International Committee of the Red Cross (ICRC) are on the ground organizing relief operations. They are working on both sides of the front line in areas where many evacuated people are taking shelter. But they are struggling to reach people in towns where shelling is ongoing.

As fighting rages between the Ukrainian army and the opposition, civilians' lives are being put in peril. People desperately need safety, food, water, medicine, power and shelter. "It's sometimes impossible to reach people in need because of the complete lack of security," said Michel Masson, head of the ICRC delegation in Ukraine. "The situation is getting worse by the day," he warned. "People are hiding in basements for days on end and those who dare to venture out to collect basic aid risk being wounded or killed."

Indiscriminate attacks are prohibited by international humanitarian law, which all parties to the conflict in Ukraine must abide by. Attacks may not be directed against civilians or civilian objects, such as homes, schools and medical facilities and vehicles, or against infrastructure indispensable to the survival of the civilian population, such as food and drinking-water installations.

Mr Masson added: "The use of explosive weapons in populated areas not only causes direct and unacceptable immediate harm to civilians, civilian property and essential services, but also generates severe and potentially long-term consequences for the population."

Over the past two weeks, the ICRC has supplied dressing kits and other medical supplies to five hospitals treating weapon-wounded patients in the Lugansk and Donetsk regions on both sides of the front line. Hemodialysis supplies and X-ray materials have been donated to Kalinin hospital in Donetsk.

In the same period, the ICRC has delivered food and other items to 40 villages, towns and cities – including Debaltsevo, Vuhlehirsk, Avdiivka, Stanitsa Luganska, Popasna and Svitlodarsk – all located in the regions of Lugansk and Donetsk, dangerously close to the frontline. Some 30,000 people received bread, flour, cereals, oil, candles, jerrycans and hygiene items.

Amid growing needs in the penitentiary system, the ICRC also delivered emergency aid to over 5,000 inmates in Donetsk and Lugansk regions, including in Donetsk city. The ICRC visits people from all sides who are deprived of their liberty in connection with the conflict.