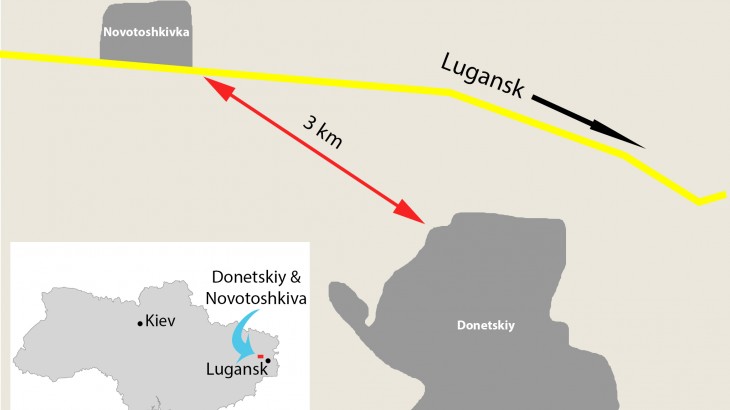 The villages of Donetskiy and Novotoshkiva are just 3 km apart at their nearest points, and share many of the same problems.

Fewer than 5 kilometres of woodland and open countryside lie between Novotoshkivka and Donetskiy, two villages in Ukraine's Lugansk region. But Novotoshkivka is in government-controlled territory, while Donetskiy is controlled by the opposition. Separated by a front line, they share a recent history of bullets, shells and rockets. February's Minsk II agreement has stopped the fighting, but mines and explosive remnants of war make it dangerous for the people of Donetskiy and Novotoshkivka to start farming again, or even to gather firewood.

Novotoshkivka was badly affected by the devastating consequences of the fighting. Now, with no supplies reaching the village, residents are helping each other get Novotoshkivka back to normal. Dariya Fomina of the ICRC's Severodonetsk office visited the village recently.

"Even before we went, we knew that Novotoshkivka had been badly damaged by the intense shelling and rocket fire of the past few months. But the reality was even worse than we had expected. The road to the village was littered with huge craters, silent witnesses to continuous shelling. Almost all the houses were badly damaged or completely destroyed. Empty windows were covered with carpets or cardboard. Thousands of houses and apartments were just abandoned. Basically, it's a ghost town." 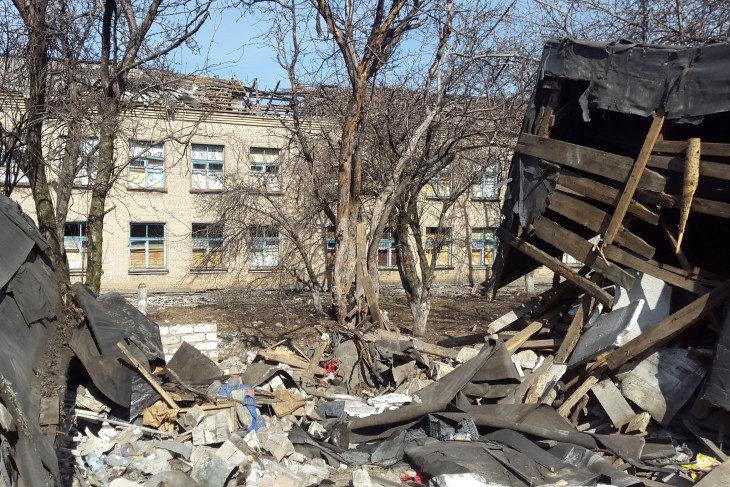 Before the conflict, some 2,500 people lived in Novotoshkivka. Now, the population is down to 400, most of them elderly or unemployed. They are surviving with no mains water and no electricity. Suppliers are afraid to deliver food. The one grocer still functioning has only just started selling bread again. 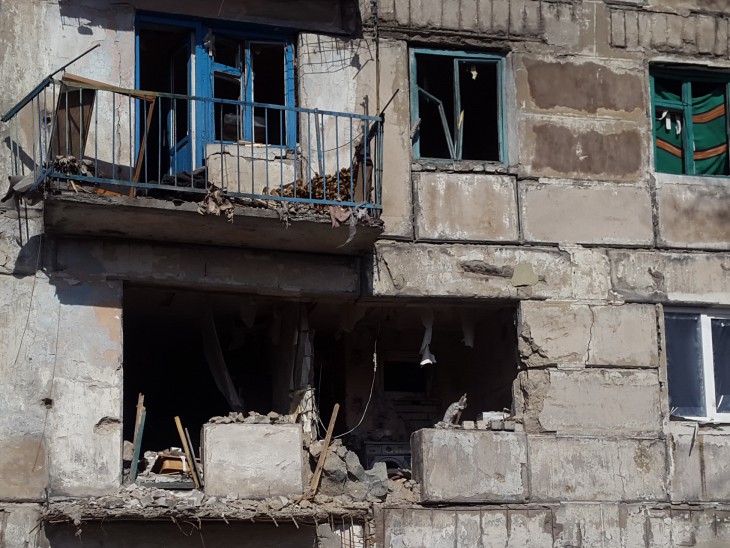 Mines and explosive devices are a real threat. The farming season is approaching, but people are realizing that it will be dangerous to plant their fields and gardens. Residents told us about a young boy who set off a mine as he tried to run away from the village during heavy shelling. 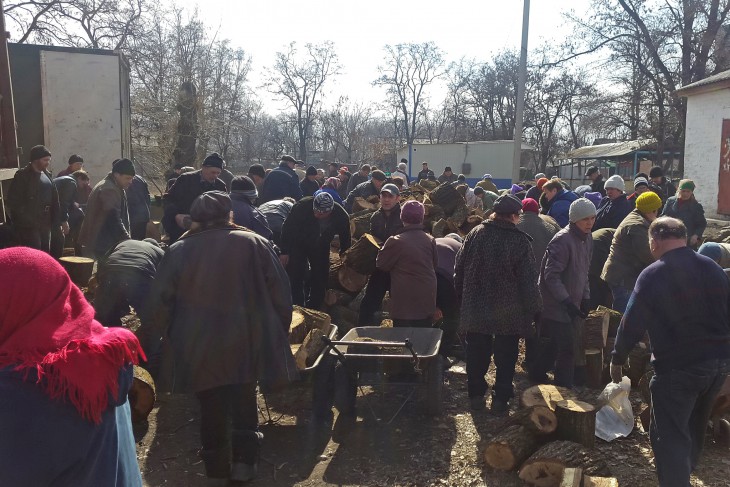 Novotoshkivka, Lugansk region, Ukraine. The people of Novotoshkivka wait for firewood. There are mines all round the village, making it dangerous to collect firewood, and there are no coal deliveries. [CC BY-NC-ND / ICRC / I. Gryshko]

Following February's ceasefire, the residents of Novotoshkivka are trying to get back to normal. But humanitarian assistance is their only means of survival for the time being. The coal mines that were the main source of income for many are closed. And yet, despite the dire economic situation, many local residents see renovating the damaged village school as a top priority. "Novotoshkivka's only chance of revival is if families with children come back. And that might be possible if we repair our school," they told us. 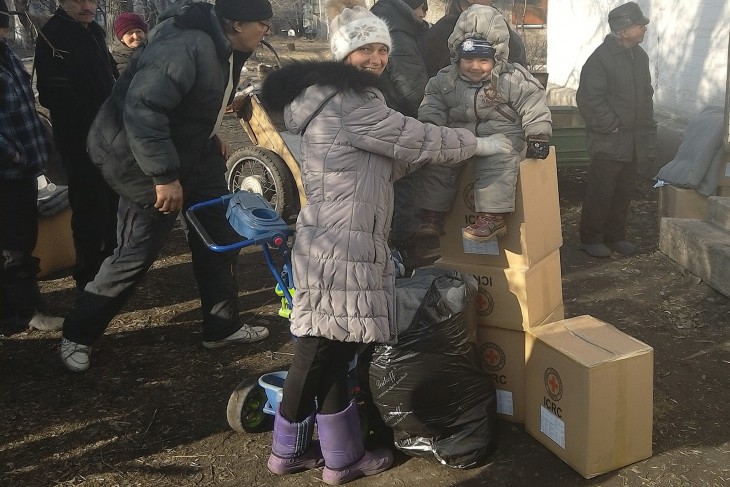 Donetskiy: A Ukrainian winter, no running water, no electricity and no food

Donetskiy lies in the opposition-controlled part of eastern Ukraine. Its inhabitants have had to survive a harsh winter and intense fighting cut off from the rest of the world, with no running water, no electricity and no food deliveries.

Like Novotoshkivka, just a few kilometres away in the government-controlled part of Lugansk region, Donetskiy is a ghost village. The situation for ordinary people on this side of the line is remarkably similar, and their needs just as desperate.

As in Novotoshkivka, the ceasefire agreement has brought some respite. And like the people of the nearby village, the residents of Donetskiy are confronted by mines and explosive remnants of war.

The team from our Lugansk sub-delegation had to wait for the February cease-fire before they could reach Donetskiy. The photos below paint a grim picture of what they found. 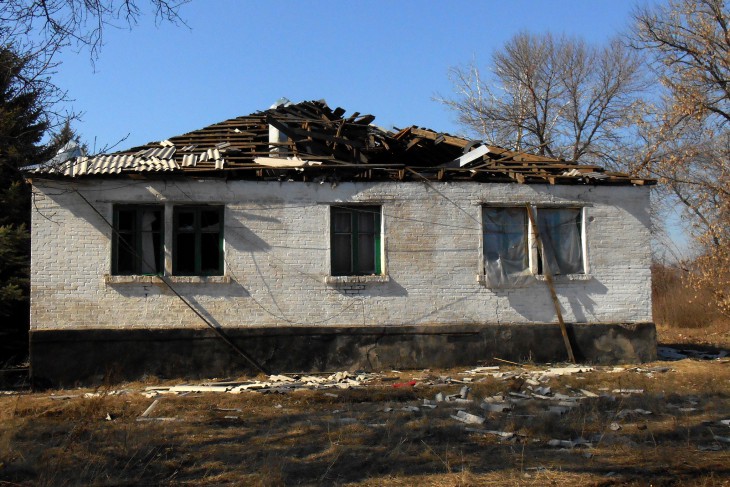 Donetskiy, Ukraine. A house with its roof blown off by shelling. [CC BY-NC-ND / ICRC / D. Bunnskog]

All of Donetskiy's shops remain closed. As the only road to the town has been destroyed, it is difficult to deliver food and other goods, and until recently, no supplies were reaching the town from the outside. With the water supply system destroyed, people are having to collect water from wells, which are often a long way from their homes. 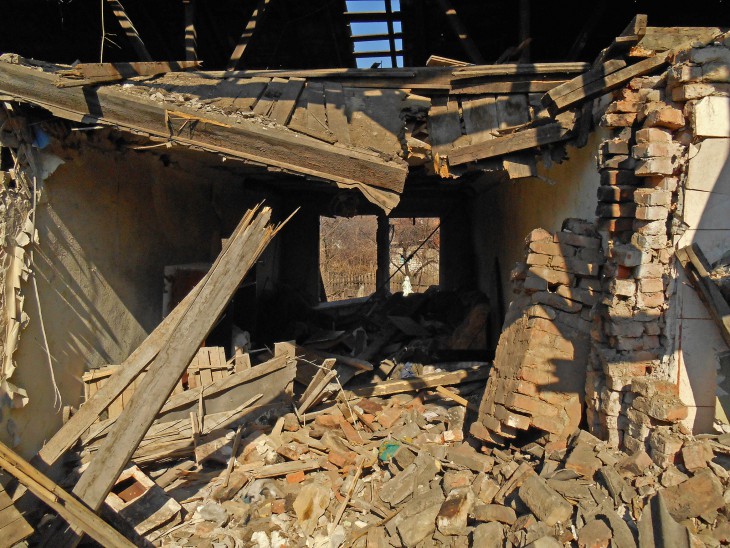 Donetskiy lies 50 km from the opposition-controlled city of Lugansk. As it was right on the front line during the fighting, the scale of destruction is immense – about 70 per cent of buildings have been destroyed or heavily damaged. 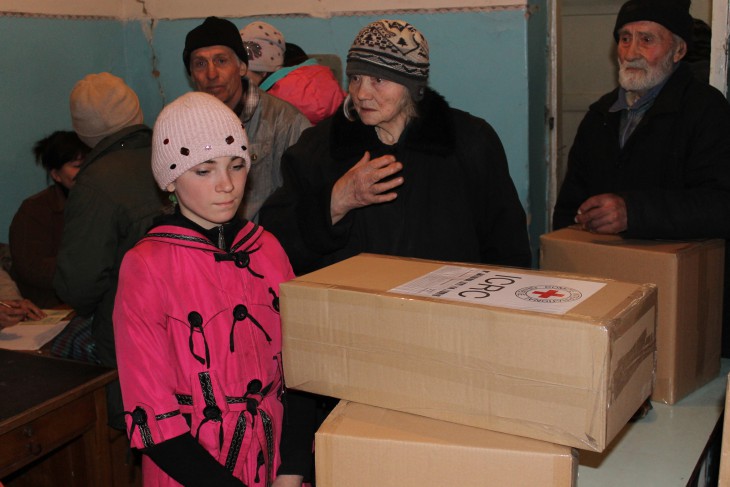 Before the conflict, Donetskiy had a population of around 3,500. Now, just over 800 people remain. Most are elderly or unemployed, although there are some families with children. None of them can generate an income and they are not receiving social benefits, so they all do their best to support each other. One example of solidarity is the communal kitchen run by an elderly woman, who cooks a hot meal in a coal oven for 50 to 100 people once a day. 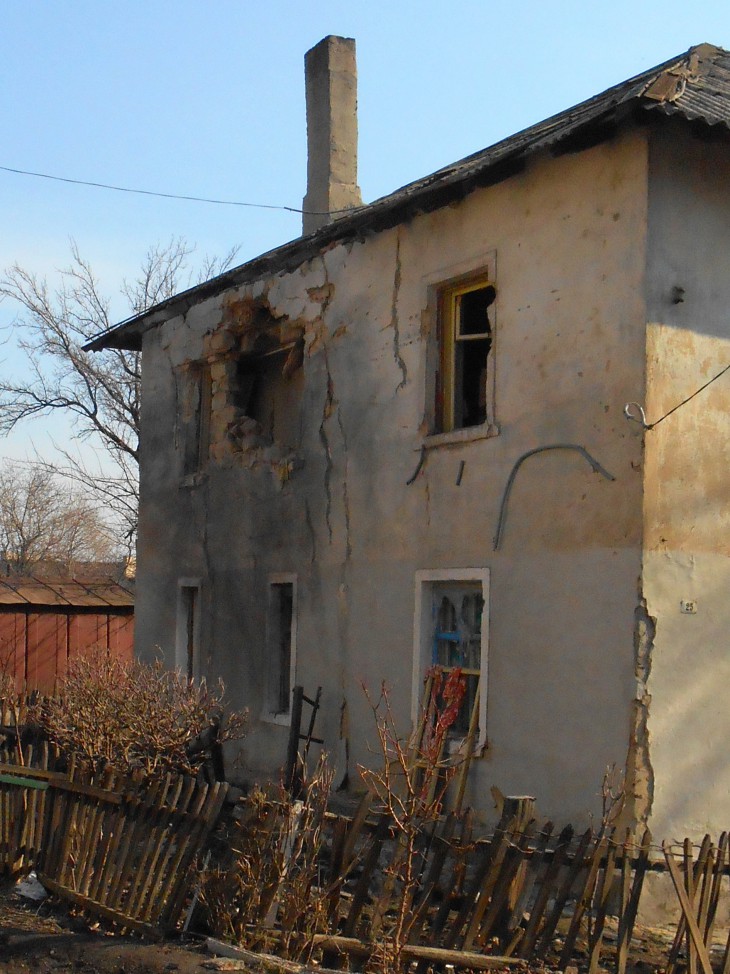 Following February's ceasefire agreement, people are gradually returning to their homes. But mines and explosive remnants of war are a significant problem. The area surrounding the town is mined, and mines have killed five people already. 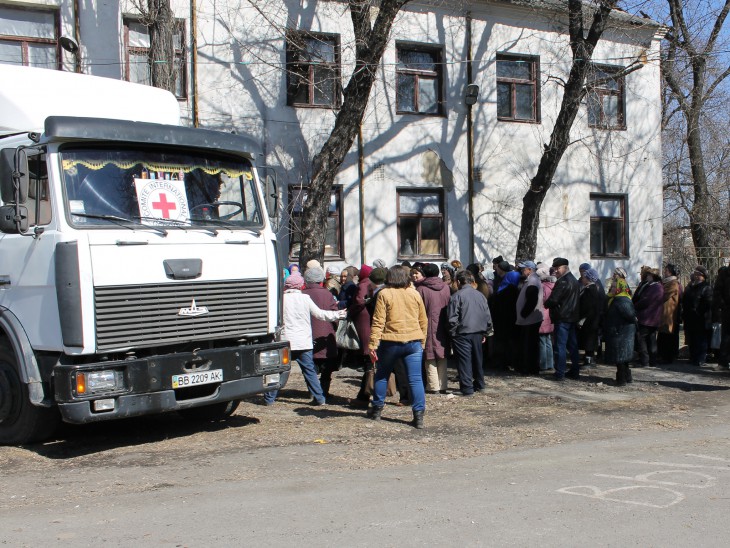