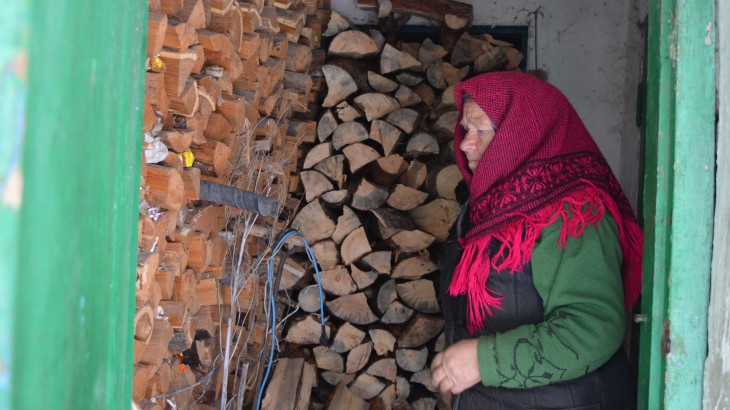 In the Luhansk region, foresters take great pride in regenerating forests, helping protect the environment and provide firewood for the local population. Through a programme that also creates jobs and clears the region of landmines, the ICRC lends a hand.

Oleksandr, a forester from Pishchane forest in the Luhansk region of Ukraine, proudly shows photos from the 1920s: the yellowed black-and-white photos show foresters planting young pine seedlings. One of these is his grandfather, who also worked in the Luhansk region. Working in the forest in the steppe-like region is similar to being a sailor thousands of kilometres away from the ocean, but Oleksandr is proud of his profession because local forests protect agricultural land from the dry winds that used to raise sandstorms here.

However, when the armed conflict broke out here in 2014, people paid less attention to the forest. "Back then thousands of hectares of forest burned, there was no one to put out fires, as shells in the forest made it dangerous to reach the fire source", said Oleh, a forester from Stanytsia Luhanska Forestry and Hunting Department.

According to preliminary 2014–2015 estimates, at least half of the 30,000 hectares of forest inspected suffered damage. If left without proper care, the forest in the steppe area that is prone to dry winds quickly becomes infested with insects that threaten the work of several generations of foresters in the Luhansk region. Alas, with State funding for forest management reduced, the Forestry Department lacks adequate resources of its own to restore regular forestry services.

The ICRC lends a hand

A programme launched recently by the ICRC has become the first step towards restoring forests in the affected areas of the Luhansk region. As part of the programme, the ICRC pays to have dry and burned trees cut and processed for firewood, which is distributed to the population free of charge. In 2017, the ICRC will help prepare 8,200 cubic metres of firewood, allowing around 1,500 households, as well as outpatient clinics and rural health posts in Novoaidar, Popasna and Stanytsia Luhanska districts of the Luhansk region to survive severe winter. 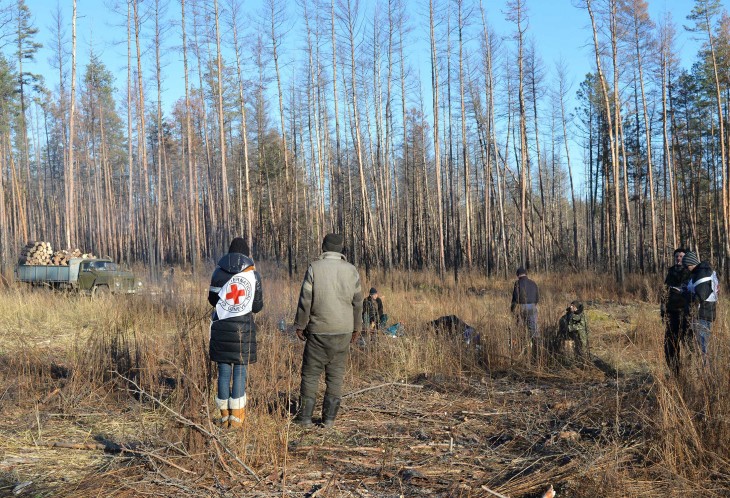 The programme has generated plenty of work that will continue until 2018. Indeed the amount of work created has even compelled the Forestry Department to recall previously dismissed workers. Today, 25 employees work at 28 sites, clearing damaged trees from the forest. To facilitate the project's implementation, and at the request of the Forestry Department, mine-clearance specialists cleared some mine-infested forest areas. In future such areas will no longer be a danger to be avoided, but rather a place where hundreds of tired citizens can find peace and calm, away from hustle and bustle of the city.

A few kilometres from the forest, evidence of reforestation is already there for all to see: a new forest, similar to the one that the region's first foresters planted nearly a century ago. "A few weeks ago there was a damaged forest in this area of 5.3 hectares," said forester Oleh. "Our foresters removed it and prepared the land for planting, and we managed to plant pine seedlings from our forest nursery here before the cold weather".

Spring will bring new work: thousands of hectares of forest have burned in the two years since the conflict began, and the effort to clear the land will go on. "If you do not remove the deadwood, clear the roads, and take fire prevention measures, in the summer heat the forest will start burning again", Oleh explained.

The villages of Lobacheve, Lopaskyne and Pishchane have received firewood. Next will be Triokhizbenka and other villages. In spring, when the planting season returns, the noises in the trees will be a reminder that future crops are safe from dry steppe winds. As foresters talk in their businesslike manner and make plans for the future, anxiety fades. "We will keep restoring the forest as long as we can", they say confidently as they slowly make their way out of the frosty forest, the snow already creaking under their feet.