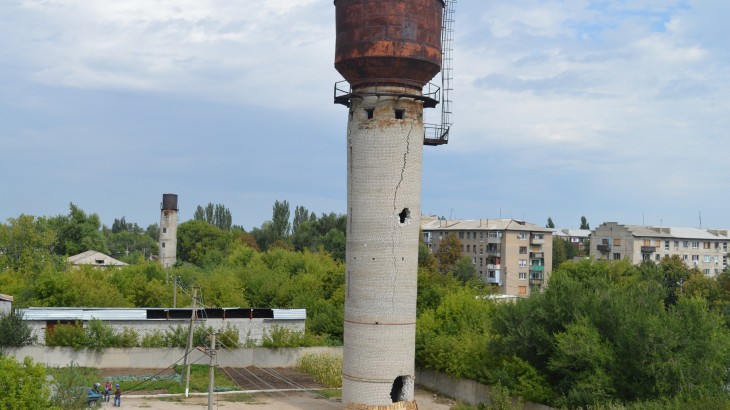 Destruction of a damaged watertower due to shelling, Popasna village, Donetsk region

Kiev/Donetsk (ICRC) – The ICRC welcomes the agreement reached in Minsk on 19 July on the establishment of safety zones along the contact line in eastern Ukraine. The zones will be created around two water installations: the Vasilevka First Pumping Station and the Donetsk Filtration Station. Troops and military equipment will be withdrawn and no military operations will take place there.

"This is a very important achievement, and a step in the right direction. We hope that the agreement will be implemented as soon as possible," said Alain Aeschlimann, the head of the ICRC delegation in Ukraine. "For the sake of the civilians living in the area, both sides must adhere to the terms: these zones are not to be shelled or used for deployment of military units or planning of military operations."

With hundreds of thousands of people who live along the line of contact in the Donbass region caught up in the hostilities, the ICRC has repeatedly warned of the toll that the fighting is taking on civilians. Many key installations are located on or close to the contact line, and the ICRC has been particularly concerned about the functioning of essential services, such as water, electricity and gas, which serve hundreds of thousands of households, as well as many schools, hospitals and kindergartens.

Safeguarding civilian infrastructure providing essential services is a cornerstone of international humanitarian law. Parties to a conflict must respect the civilian purpose of critical infrastructure and services. Placing military positions near such infrastructure makes it vulnerable to attack and could have serious humanitarian consequences.

For over a year, the ICRC has been discussing its proposals to establish safety zones around several critical infrastructure sites, namely: the Third Lift Pumping Station on Severski Donetsk Channel, the Vasilevka First Pumping Station with the Donetsk Filtration Station, and the Verkhnekalmiuskaya Filtration Station (all in the Donetsk oblast); and the water pipeline in the Zolotoe/Pervomaisk area (Karbonit) and the Petrovskiy well field (in the Lugansk oblast). The ICRC's proposals, and the details of how they would be implemented, were discussed with representatives of the Ukrainian authorities, the Organization for Security and Co-operation in Europe (OSCE), and representatives of non-government-controlled areas in Donetsk and Lugansk.

The ICRC will continue to discuss establishing further safety zones, which can only happen with the agreement of all parties, either directly or through a neutral intermediary. The ICRC, as always, stands ready to act as a neutral intermediary and to facilitate the process between all sides.