Women talk to women: ICRC humanitarians speak up amid conflict and crises 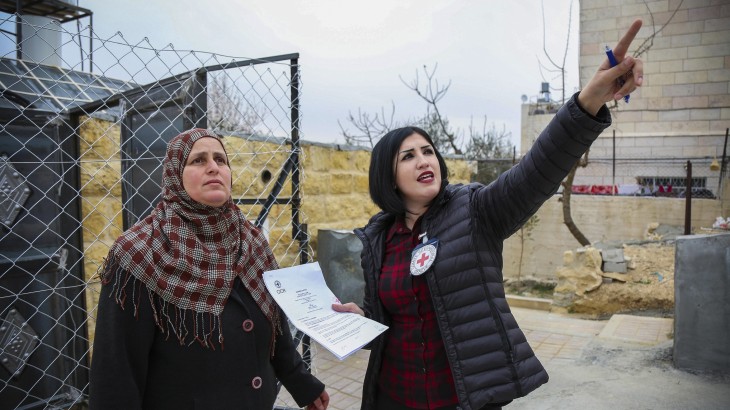 Women Humanitarians - Hebron. Adaweya Biltaji, 33, staff member of ICRC protection department in Hebron is speaking to a local woman who has approached the ICRC for support. Photo: Jabr Atta / ICRC

Their work is particularly important in those places and conflicts where women and children are disproportionately affected, whether through losing their homes or families, or facing the threat and reality of sexual violence. Women humanitarians provide vital access to these people and communities.

In Yemen, for example, the United Nations estimates that up to 83% of internally displaced and returnees are women and children. Pregnant and nursing women are especially vulnerable during times of conflict: there are an estimated 3 million women and girls of childbearing age who need support in Yemen and the United Nations says food shortages have left an estimated 1.1 million pregnant women malnourished.

In South Sudan, where fighting has affected millions of people, women and children are most affected. In 2018, the International Committee of the Red Cross (ICRC) admitted 121 minors (under 15) and 125 women into our hospitals with injuries resulting from weapons. Women and children made up 30% of the patients who came into ICRC-supported health facilities with injuries from weapons.

The ICRC recognizes that just as women are not always victims, men are also vulnerable, disproportionately so in certain situations. Most victims of forced disappearance are men, leaving mothers, wives and sisters behind craving answers and closure. Men are more likely to die in conflict, leaving women as the head of a household, with a family to support and children to raise. In our humanitarian response, we focus on finding ways to empower women and minimise the risks they face.

One thing is clear - there is no question that all women, men and children deserve protection and help in times of conflict, and that those who respond and rally to their side also deserve recognition and protection under international law. Here are some of their voices:

YEMEN: "If you want to understand what families are going through, you have to be able to sit and speak to the women."

Irish nurse Avril Patterson has spent the past decade working in conflict zones and emergency situations, from Liberia to Afghanistan to Syria, where she spent four years. She moved to Yemen last year to head the International Committee of the Red Cross's health programme there. She is based in the capital Sana'a.

SOUTH SUDAN: "Patients sometimes say how nice it is, and how unusual, to have a female surgeon treating them."

Nadia Rudneck is a Brazilian doctor on her first mission with ICRC. She specialized in trauma and emergency during her studies with a view to becoming a humanitarian medic. She works at the Juba Military hospital in South Sudan, where she is the only female surgeon. She is available for interviews in Portuguese and English.

GEORGIA: "I've seen how being a woman opens doors. People wanted to approach me, they trusted me."

Valeska Martinez is a forensic anthropologist with the ICRC in Georgia. Originally from Chile, she started her career in Peru, before working in places like Somaliland, Mauritania, El Salvador, Ecuador and Brazil. She is based in Sukhumi, where she works with a mainly female team on cases of people still missing from the conflict in the 1990s. She is available for interviews in English and Spanish.

Note to editors and producers: AV footage of ICRC's forensic work in Georgia and photos of Valeska in the field available on request. More information on ICRC's work on missing persons.

GENEVA: "I always felt it was a big advantage to be a woman in the field."

Patricia Danzi is regional director for Africa at the ICRC, where she oversees all ICRC operations on the continent, responsible for 7000 staff. A former Olympic athlete, she has been with the ICRC since 1996, working in a range of roles in the field worldwide. She is now based in Geneva. She is available for interviews in English, French, German and Spanish.

AV footage of ICRC's operations in a variety of African countries are available on request.