Work on the missing requires determination; we must keep the course no matter the commitment 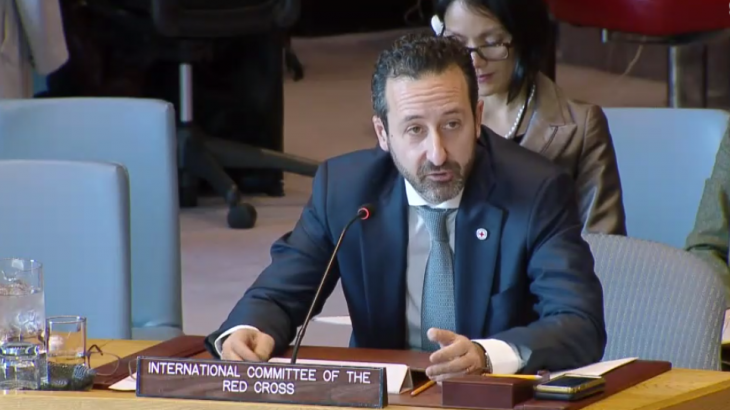 As delivered by Mr. Robert Mardini, Permanent Observer to the UN and Head of Delegation, ICRC New York

Thank you, Madam President, for the opportunity to address the Council. We also thank Kuwait for its efforts to keep the issue of the missing persons as a topic of importance in this Council and for its efforts on this issue as demonstrated through drafting the first resolution on missing persons in armed conflict adopted in June 2019.

The International Committee of the Red Cross has chaired the Tripartite Commission since its founding in 1991. Following the end of the Gulf War. Iraq, Kuwait and Coalition members – Saudi Arabia, France, the United Kingdom and the United States – created the Commission to search for missing persons. Today the Commission and its Technical Sub-Committee, with UNAMI serving as observer and the ICRC as chair, aim to trace persons still unaccounted for and provide answers to families.

Just over a year ago, the ICRC provided this Council an update on the workings of the Tripartite Commission and the Technical Sub-Committee. We reported that since the founding of the Tripartite Commission we had helped repatriate more than 75,000 citizens, civilian internees and prisoners of war. After 2003, once the search for burial sites began in Iraq and later in Kuwait, the remains of 275 persons in Iraq and 98 persons in Kuwait have been recovered. To date, a total of 1,080 cases of missing persons remain open within the frame of the mechanism. Of these 1,080 cases, 371 were reported missing by Kuwait, 700 by Iraq and 9 by Saudi Arabia.

Today, I am pleased to confirm that for the first time in 14 years Kuwaiti remains were recovered. These remains were recovered in Al-Muthanna, Iraq in March 2019. Since 2003, the members of the Mechanism with the support of the ICRC have been conducting excavations in both Iraq and Kuwait. Prior to this year the last successful exhumation of human remains was in 2011. Those were Iraqi remains found in Kuwait. No remains or burial sites were found for eight years – and it's been 14 years since the last recovery of Kuwaiti remains.

Early this year we had a breakthrough with new information leading to identification of two mass graves of alleged Kuwaiti citizens. This breakthrough came about in part due to the recommendations and findings from the ICRC's "Review Project" completed in July 2017. The project took stock of the situation, involved experts and forensic specialists, and proposed recommendations for future work. The Review Project Report and its recommendations were adopted by the Tripartite Commission in December 2018 and have been used since to guide desk- and field-based work deployed to make progress in the search and recovery of further remains of missing persons.

Witness information, analysis of satellite imagery and several previous exploration missions led us to Samawa in Al-Muthanna Governorate. It is where the breakthrough happened, and human remains were exhumed in March 2019. In August, the Iraqi authorities handed over 46 boxes and 2 bags containing those remains, which are currently being processed by the Kuwaiti authorities at their national forensic laboratories. This is a time-consuming process that is expected to last into next year. If a match is found, the remains will be reunited and returned to their families.

This year the Human Rights Directorate at the Iraqi Ministry of Defense, with the support of the ICRC, carried out further extensive exploration and excavation missions across the southern deserts of Iraq. Based on new and previously available witness information, comparisons with archival records and analysis of satellite imagery, several exploration and excavation missions, in addition to Al-Muthanna, were carried out in the Governorates of Karbala, Thi-Qar and Al-Anbar. Unfortunately, no human remains were found in these three locations.

There is a lesson here in this breakthrough. The wounds of the missing are long-lasting and deep. When persons go missing their absence affects the family, the community, and the society as a whole. To solve these cases takes time, patience and cooperation between governments, humanitarian organizations and the families of the missing. But most importantly the work on the missing requires perseverance and determination. It can take years of work to uncover answers and address the cases of the missing. Each one of these individuals is important. We have to keep the course on each one no matter the time or commitment it may take.

In the future, the Tripartite mechanism hopes to continue identifying further remains. The members of the Mechanism agreed to update existing protocols for the transfer of human remains between Iraq and Kuwait to bring them in line with the respective domestic legal frameworks and best practices. Field missions are being organized by Iraq regularly to explore and excavate sites of interest. Other members of the mechanism, namely, the United Kingdom, France and the United States, have made significant efforts to provide relevant information in the hope that further research will help identify more grave sites in Iraq and Kuwait.

As chair of the Tripartite Commission, the ICRC is committed to upholding the right of families to receive answers about the fate of their missing loved ones. To this end, we shall spare no effort in the search and recovery of human remains wherever conflict or other situations of violence may have left an open wound. We hope that Member States will join us on this mission by upholding their obligation under international law to prevent people from going missing in the first place and by clarifying the fates of those who have.