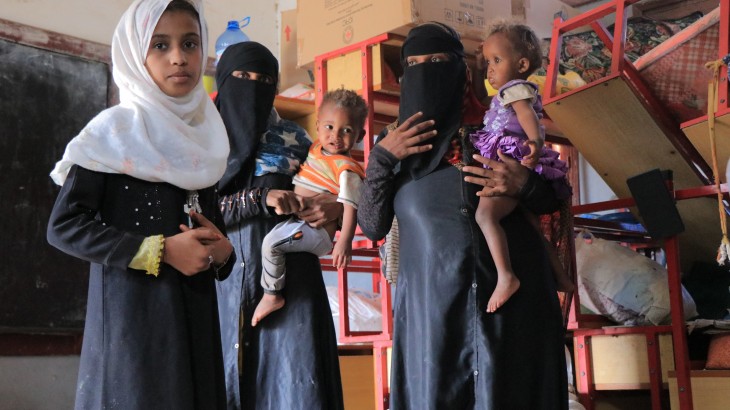 Renewed fighting in Al Dhalea province has caused thousands of families to flee their villages under harsh circumstances.

According to the displacement tracking report by IOM, over 65,000 people had left their homes from January to September 2019. This of course does not include the new wave of internally displaced people (IDP), which number is unknown. Families are saying that more people are on their way or trying to find the right timing to flee.

The ICRC and Yemen Red Crescent Society teams were in Al Khobar town distributing food and essential household items to displaced people when they saw scores of newly displaced families coming from various parts of the region.

Thousands of people have survived terrifying violence in Yemen.

Forced to flee their homes.

Walking across areas littered with explosives.

Now they have nowhere to go. pic.twitter.com/D7Ag7tISCF

“The clashes are intense. We were sitting very scared in the corner of a room. The kids were terrified and crying. The bullets reached inside our houses. Three of us got injured back there, and the rest of our families is unable to flee.”

They had to walk in the middle of the night for hours crossing areas contaminated by unexploded ordnance, with very limited access to food and water. Some people were seen on top of each other riding pick-up trucks going from one place to another looking for shelter. Newly displaced people have difficulties to find a place to settle down.

Several buildings and schools in Al-Dhalea have become shelters for families who fled the fighting since the beginning of the year. These facilities are overcrowded, full of young men, women, and children who have no source of income.

Desks in the classrooms are piled up on top of each other, pushed towards the walls to make room for what would become the home of many of the displaced families. Some classrooms host two to three families (15-25 people). As water is scarce in the area, school latrines are not functioning.

Families who fled from the other side of the frontline during the past months are still displaced and unable to go back to their villages as their homes are destroyed and their areas are heavily contaminated with remnants of war. The ongoing fighting deters many to return to their place of origin.

In September and October, ICRC and Yemen Red Crescent Society teams were able to help more than 38,000 people on both sides of the frontline. The most recent distribution covered more than 10,000 people in Hussain and Al Dhalea city.

We are assessing the needs of the newly displaced people and distributions will start soon, provided the security situation allows it.

Al Dhalea province is halfway between Sana’a and Aden and is considered a major entry point for aid and commercial supplies. Each time the hostilities resume, they disrupt the main route for goods, letting tons of food such as grains to rot, displace thousands of people, and make it extremely hard for them to reach medical facilities. Each time they occur, heavy clashes force civilians, commercial trucks and aid agencies to take long and dangerous mountain passes.

The ICRC urges all parties to the conflict to respect civilian life by taking every possible measure to protect and respect civilians and civilian infrastructure, and to allow safe passage for those who want to escape the fighting in search for safety.