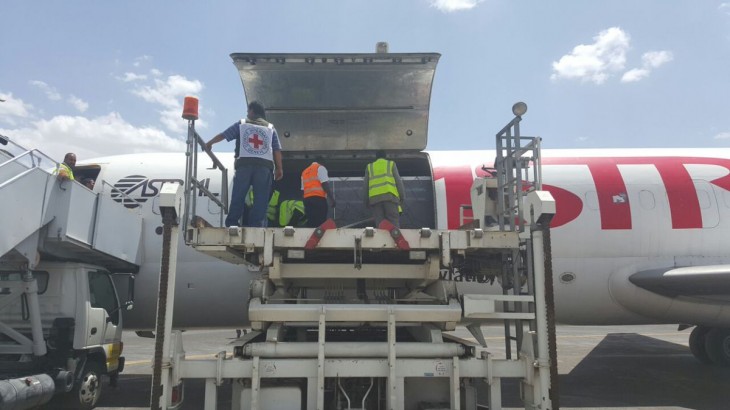 Sana'a/Geneva (ICRC) – A plane chartered by the International Committee of the Red Cross (ICRC), touched down at Sana'a international airport earlier today, carrying vital medical aid for thousands of people. The cargo of 130,000 vials of insulin will be used to improve the quality of life for people suffering from diabetes.

"People with chronic disease are often forgotten during times of conflict. At this time in Yemen, there is a severe shortage of medications for these people. This insulin cargo will help thousands of diabetics whose suffering has been heightened since the conflict started," said the head of the ICRC in Yemen, Alexandre Faite.

It is estimated that around 900,000 Yemenis suffer from diabetes. An overwhelming majority of them depend on daily doses of insulin.

"Yemen's health sector is in a terrible state. The ongoing conflict has led to reduced production of medications by local pharmaceutical companies. The situation has been compounded by restrictions on the movement of medications into and across the country. Subsidized medication, including insulin, used to be provided on a regular basis by the Yemeni Ministry of Public Health. But it is now out of reach for thousands of patients," said Mr Faite.

"The insulin cargo we have brought in today complements other efforts we are undertaking to address some of the severe shortages of medical supplies in the country. Less than 30% of the required medicines and medical supplies have entered Yemen in 2015," said Mr Faite.