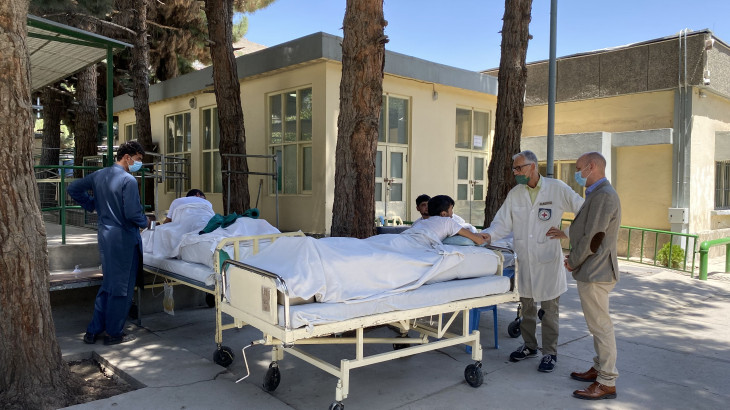 Since 1 August, 4,042 patients wounded by weapons have been treated at 15 ICRC-supported health facilities, an indication of the intensity of the recent violence.

Geneva/Kabul (ICRC) – Hundreds of thousands of civilians are at risk as fighting intensifies in and around Kunduz, Lashkar Gah, Kandahar, and other Afghan cities. The International Committee of the Red Cross (ICRC) is calling on both parties to the conflict for immediate restraint. The ICRC calls for civilians and vital infrastructure such as hospitals to be protected from attack and any collateral damage caused by fighting in populated areas.

Since 1 August, 4,042 patients wounded by weapons have been treated at 15 ICRC-supported health facilities, an indication of the intensity of the recent violence.

"We are seeing homes destroyed, medical staff and patients put at tremendous risk, and hospitals, electricity and water infrastructure damaged," said Eloi Fillion, the ICRC's head of delegation in Afghanistan. "The use of explosive weaponry in cities is having an indiscriminate impact on the population. Many families have no option but to flee in search of a safer place. This must stop."

Street-to-street clashes in Kunduz, Lashkar Gah and other cities over the last few days have injured hundreds of civilians even as medical services are heavily strained due to damage to health facilities and a lack of staff. Electricity is out across several contested cities and water supply systems are barely operational in some places. Many families are trying to leave but cannot find transport to escape or simply do not have the financial means.

The ICRC and its partner the Afghan Red Crescent Society (ARCS) are doing as much as they can to evacuate the wounded and transport the mortal remains of those killed as a result of the conflict. In July alone, the ICRC helped nearly 13,000 patients suffering from weapon-related injuries across the country, and this number appears likely to rise this month as fighting increases in highly populated areas.

"Health-care facilities, medical workers, and ambulances must be spared at all cost," said Fillion. "We also call on all fighting parties to allow humanitarian organisations like the ICRC and ARCS to safely evacuate the injured and bring much-needed assistance to the civilian population."

In Afghanistan, the ICRC has a team of 1,800 international and national staff who provide diverse humanitarian assistance across the country. Our aim is not only to bring assistance, but also to keep civilians and people deprived of their freedom safe from harm. To know more about ICRC activities during the first six months of 2021, please read our operational update.