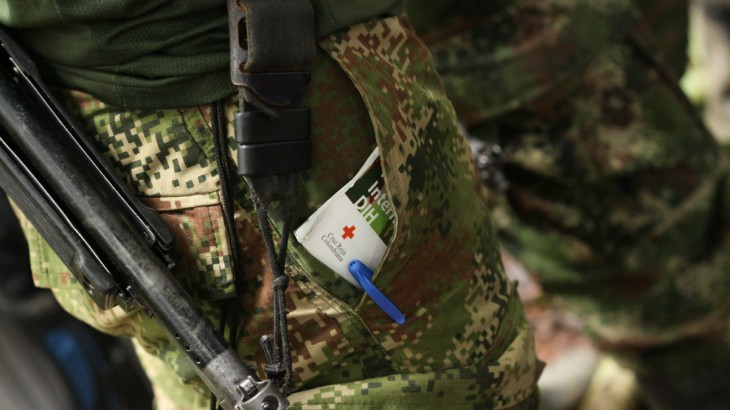 The period following the signing of an agreement between the Colombian government and FARC-EP has given rise to a complex situation, prompting the ICRC to update its legal analysis of the context.

On the one hand, the power vacuum left by the former FARC-EP has led to clashes between other organized armed groups, such as the Ejército de Liberación Nacional (National Liberation Army, ELN) and the Ejército Popular de Liberación (People's Liberation Army, EPL). Some of those clashes appear to be increasing in intensity, and could eventually form new non-international armed conflicts. At the same time, certain areas of the country are suffering the effects of confrontation between armed groups that claim the legacy of the former FARC-EP and have demonstrated their intention of not becoming part of the peace process.

This situation poses a number of challenges. Perhaps the most significant of these is the lack of clarity regarding the activities and modus operandi of some of these groups, which is hindering the ICRC's efforts to help the victims of armed conflict and other situations of violence. Indeed, the first pre-requisite if one wishes to help those suffering the effects of violence is to know what legal regime applies. That in turn lays the foundations for a dialogue aimed at protecting those who are suffering its effects.

How does IHL classify armed conflicts?

It is important to note that the motives of the armed group are irrelevant when deciding whether a situation constitutes an armed conflict or not. Whether a group is opposing a State for political, ethnic, economic or religious reasons – or any combination of such reasons – does not affect the applicability of IHL.

At the same time, the States party to the Geneva Conventions have recognized the ICRC's mandate to work in contexts that do not attain the threshold of armed conflict whenever a certain level of violence is being committed by one or more groups and is affecting the population in human terms.

Such situations include, for instance, internal disturbances, internal tensions, demonstrations involving serious violence, armed strikes, certain forms of crime and other types of collective violence that do not attain the threshold of an armed conflict.

So what is the situation in Colombia?

Colombia is experiencing both armed conflicts, which are governed by IHL, and other situations of violence, which are governed by domestic law and international human rights law. Currently, the ICRC considers that at least five non-international conflicts are taking place in Colombia: four between the Colombian government and the ELN, the EPL, the Autodefensas Gaitanistas de Colombia (Gaitanist Self-Defence of Colombia, AGC) and elements of the former Bloque Oriental (Eastern Bloc) of the FARC-EP that have not accepted the peace process.

There is also a fifth non-international armed conflict, involving the ELN and the EPL, centred on the Catatumbo region.

But what about the other armed groups that claim the legacy of the FARC-EP? Everything depends on the extent to which certain groups are truly linked (through hierarchical relationships or via certain types of cooperation) with the former 1st, 7th and 40th "Frentes" or fronts of FARC-EP, which have not accepted the peace process, and which the ICRC has classified as parties to a conflict. (A Frente consists of a few hundred persons). In such a case, one could say that these new groups were also parties to the non-international armed conflicts mentioned above, and that it was therefore permissible under IHL to use force against them.

However, in the absence of clear links demonstrating that these entities are involved in the existing non-international armed conflict between the Colombian government and those elements of the former Eastern Bloc that have not accepted the peace agreement, it would be necessary to analyse the organization and the level of intensity in order to conclude that IHL was applicable. In other words, if a group that claims the legacy of the FARC-EP has no real links (hierarchy, cooperation, etc.) with parties to an existing conflict, as could be the case of the former elements of FARC-EP's Eastern Bloc that have not accepted the peace process, it would be necessary to decide whether the criteria mentioned above were fulfilled, i.e. the degree of organization of the parties and the intensity of the violence.

In view of the above, it is necessary to carry out a detailed analysis of the facts before drawing any legal conclusions. Failure to do so could lead to the risk of the Colombian government (and others) over-using IHL by applying this branch of the law to situations that do not meet the criteria for being classified as an armed conflict. In other words, deadly force might be used against persons who were not taking part in an armed conflict, which could be contrary to international law.

Finally, Colombia is experiencing other situations of violence that do not reach the threshold of armed conflict, but in which the ICRC is carrying out its humanitarian work. These include certain situations of violence in cities such as Medellín, Buenaventura, Cali and Tumaco, plus the use of force during protests, such as in the case of agricultural strikes or of demonstrations that become violent.