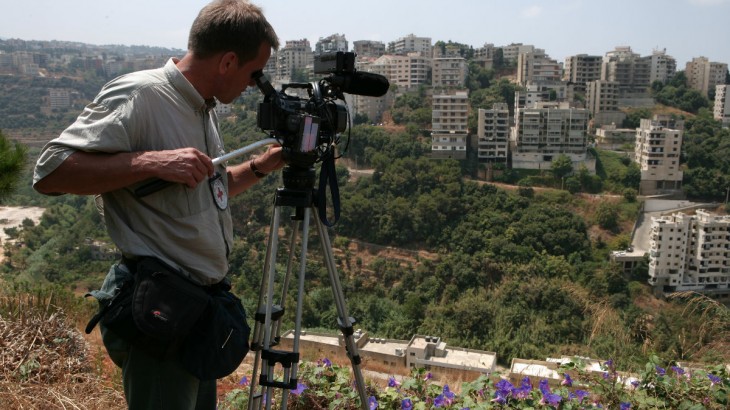 Armed conflicts have given rise to countless stories that have inspired the arts world. In this article, the ICRC delegation in Colombia presents ten films and television series that have been seen or should be seen by all international humanitarian law (IHL) buffs.

About the application of IHL in populated areas and direct participation in hostilities
Director: Clint Eastwood (United States, 2014)

American soldier Chris Kyle became the US Army's best known sniper in Iraq. The film, based on his autobiography, tells about direct participation in armed conflict and how some soldiers have to conduct operations in areas inhabited by civilians.

About genocide and the protection of civilians in war
Director: Steven Spielberg (United States, 1993)

The horrors perpetrated by the Nazis during the Holocaust led German entrepreneur Oskar Schindler to take action to prevent 1,100 Polish Jews being sent to their death at extermination camps. He obtained work permits and brought many of them to his factory to work for him. He eventually went bankrupt after spending his fortune on bribes and looking after his employees at the factory, which was controlled by Nazi officials.

About the prosecution of war criminals in international courts
Directors: Rob W. King and Pieter Verhoeff (Canada, Japan and the Netherlands, 2016)

This television series, based on real-life events, follows the story of the creation of the International Military Tribunal for the Far East (unfolding in parallel with the Nuremberg Trials) to try Japanese political and military leaders accused of crimes against peace, war crimes and crimes against humanity.

About the law of occupation and the interaction between IHL and international human rights law (IHRL)
Creators: Lior Raz and Avi Issacharoff (Israel, 2015)

This series follows the undercover operations of a special unit of the Israeli Defence Forces assigned to hunt down a member of Hamas in the West Bank. Directed by journalist Avi Issacharoff, it shows both the Palestinian and Israeli side of events.

5. Los colores de la montaña (The colours of the mountain)

This film tells the story of the friendship of a group of children growing up in a rural area of Colombia. One day, while playing, they lose their ball in an area contaminated with explosive devices. As the story unfolds, following the children's quest to recover their precious ball, the film also depicts the plight of rural families driven from their homes by the dangers that the armed conflict poses.

6. Beasts of no nation

Agu is an African boy who loses his parents in the armed conflict and is forced to join an armed group. In the midst of the fighting, he is sexually abused by his commander, who forces him to commit atrocities and take drugs to ensure his obedience. After surrendering and being placed in the care of a group of people who rescue child soldiers, the boy suffers post-traumatic stress syndrome, tormented by what he has seen and the things he was forced to do.

Louis Zamperini is an Olympic athlete who enlists in the US Army during the Second World War. After his plane crashes and he is left adrift at sea for more than a month with two fellow soldiers, only one of whom survives, he is taken prisoner by the Japanese armed forces. The athlete is taken to a camp for American prisoners of war where he is subjected to brutal treatment. He is then moved to a forced-labour camp, but manages to survive in spite of the harsh conditions. The film is based on a true story.

About the extraterritorial use of force and the framework applicable to drone warfare
Director: Gavin Hood (United Kingdom and South Africa, 2015)

A British intelligence agent has to capture the leaders of an armed group in Nairobi (Kenya). However, when she learns that the men are planning a suicide mission, she decides to strike first. To carry out the assignment, she works with an American drone pilot, who is instructed to bomb the place where the members of the group are meeting.

It is 1993 and the Balkans are a war zone. Two soldiers (one Bosnian and the other Serbian) end up trapped in a mined area between the frontlines. The Bosnian, who is wounded, manages to climb into an abandoned trench to hide, and is joined there by a Serbian sent to scout the situation. In spite of being on opposite sides, the two men, together with a group of Blue Helmets, try to save a Bosnian solder who is lying on an anti-personnel landmine that could explode at any time.

About respect for and protection of cultural property
Director: George Clooney (United States and Germany, 2014)

With the Second World War in full swing, British and American history, museum and art experts are sent by Franklin D. Roosevelt to recover works of art stolen by Nazi officials in order to return them to their rightful owners. Risking their lives, the men embark on a virtually impossible mission.