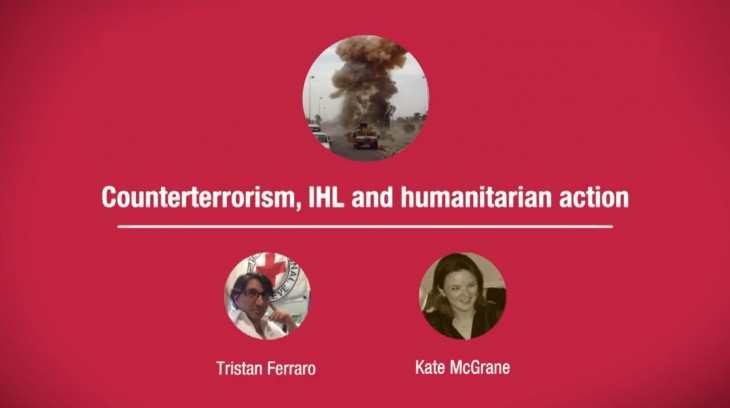 The last decade has seen a surge in terrorism. In response, States have taken numerous measures to combat it. While pursuing legitimate aims, counterterrorism measures can have a considerable impact on how or whether States fulfil their obligations under international humanitarian law, as well as on impartial humanitarian action in armed conflict.

While IHL does not provide a comprehensive definition of terrorism it prohibits “[a]cts or threats of violence the primary purpose of which is to spread terror among the civilian population” (Additional Protocol 1, Article 51(2); see also Geneva Convention IV, Article 33(1) and Additional Protocol II, Article 4(2)(d)). In that sense, IHL and the legal framework governing counterterrorism share common ground. However, both regimes also contain major differences and thus need to be distinguished: IHL regulates both lawful and unlawful acts of violence whereas, within the legal framework governing counterterrorism, all acts of violence labelled as “terrorist” are generally considered to be unlawful.

The relationship between IHL and the counterterrorism legal framework has often been the object of misconceptions. Whereas IHL does not apply as a whole to the “global fight against terrorism” it is applicable in some contexts concerned by it, provided the criteria to classify those situations as armed conflicts are met. This has raised several questions: does IHL apply to non-State armed groups considered terrorists? Is IHL adapted to address the threat emanating from those groups? Can the applicability of IHL lead to impunity for those committing terrorist acts in armed conflict? Dealing with these issues has been increasingly difficult because of the current narrative supported by counterterrorism measures. It reflects the tendency of States to consider any act perpetrated by non-State armed groups as terrorist, unlawful and subject to prosecution. Some States also believe the applicability of IHL to a situation can give legitimacy to non-State armed groups. This narrative blurs the lines between armed conflict and terrorism with potentially adverse effects on the applicability and integrity of IHL.

Counterterrorism measures also affect humanitarian action. There has been a proliferation of measures – most notably in UN Security Council Resolutions – that place limits on or even prohibit humanitarian organizations from providing impartial humanitarian aid in practice. For example, too general and absolute a prohibition on material and financial support to terrorists or people associated with terrorist groups (that could include close or distant relatives, even if not involved in terrorist activities at all) will prevent or delay humanitarian assistance to affected populations. In this context, conducting impartial humanitarian activities according to the most urgent and pressing needs within the IHL framework, becomes increasingly difficult. There is therefore a growing concern over the risk that humanitarian actors could be prosecuted for having provided lawful, impartial and humanitarian aid. The security of their local staff in charge of such relief operations could also be cause for concern.

The interactions between IHL and the counterterrorism legal framework create challenges that need to be addressed. When counterterrorism measures are adopted – as legitimate as they are – it is important to ensure that they respect the integrity of IHL and preserve the imperative of humanitarian action. Beyond preserving human dignity in armed conflict, respect for humanitarian law and action can also represent an important way to start addressing the root causes of terrorism.

2. Videos: the entire session can then be watched at once, or by chapter, depending on the need and specific interest of each user. Videos can also be watched and discussed in class, as an introduction to the topic triggering questions and debate.

3. Teaching tools: ICRC tools on how to teach IHL as well as specific, ready-to-use teaching materials on IHL and humanitarian principles are available. Lecturers are encouraged to use them to incorporate the topic in their course or training.

4. Further reading and resources: lecturers and humanitarian professionals are encouraged to further explore the topic via additional resources (e.g. ICRC statements, publications, event reports) about IHL and humanitarian principles and related topics. Researchers may wish to use them as sources for their research projects.

Tristan Ferraro, ICRC
Tristan Ferraro is a senior legal adviser at the Legal Division of the ICRC. He is responsible for legal issues relating to multinational forces, occupation, protection of civilians and the notion of armed conflict. He is also in charge of the files relating to humanitarian access and to IHL & terrorism. Before coming back to the Legal Division at the ICRC HQ in 2007, he has served with the ICRC in the field, in particular as legal coordinator in Afghanistan, Pakistan and Israel/Palestinian occupied territory. Prior to joining the ICRC in 2002, he worked as senior lecturer at the University of Nice-Sophia Antipolis, teaching inter alia Public International Law, including IHL. He is a Doctor of Laws, which he earned (summa cum laude) at the University of Nice-Sophia Antiopolis.

Kate McGrane, Norwegian Refugee Council (NRC)
Kate McGrane is the Senior Humanitarian Policy adviser at NRC Geneva, specializing in the impact of counterterrorism measures and countering violent extremism with regard to principled humanitarian action. In 2015 she co-authored NRC’s Risk Management Toolkit in Relation to Counterterrorism Measures. More recently, she drafted the NRC’s first paper on countering violent extremism in relation to humanitarian action. Prior to joining the NRC in Geneva in 2015, she spent eight years managing humanitarian and development programmes for NGOs in East and Central Africa, and the Middle East.