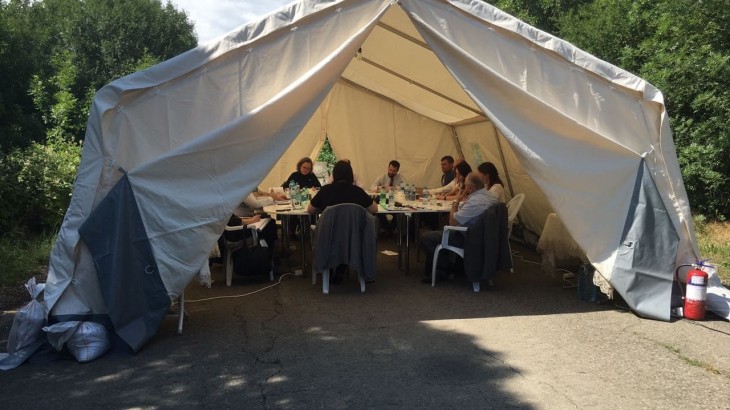 The 14th meeting of the Coordination Mechanism seeking to clarify the fate and whereabouts of people missing in relation to 1990s and August 2008 armed conflicts took place on 19 June in Ergneti. CC BY-NC-ND / ICRC / L Milner

Geneva (ICRC) –  The 14th meeting of the Coordination Mechanism seeking to clarify the fate and whereabouts of people missing in relation to 1990s and August 2008 armed conflicts took place on 19 June in Ergneti.

The Coordination Mechanism was established under the auspices and with the technical expertise of the International Committee of the Red Cross (ICRC) in 2010, in its role as a neutral intermediary. The Mechanism brings together Georgian, South Ossetian and Russian participants to continue discussing their efforts to clarify the fate of people unaccounted for during the armed conflicts of the 1990s, August 2008 and their aftermath.

“The continued joint engagement by the participants in the Mechanism is key to the process of bringing answers to the families of missing persons,” says Nicolas Fleury, the ICRC operations coordinator for Europe and Central Asia, who chaired the meeting.

The discussions included an update on the progress made since the last meeting of the Coordination Mechanism in November 2018. The focus was on the search for information on possible burial places.

“The dialogue within the Coordination Mechanism has a strictly humanitarian character. As such, the steps taken thereof demonstrate the shared understanding of the need to move the process of searching for the missing persons forward,” adds Fleury.

According to International Humanitarian Law, the families of those who have gone missing have the right to know what happened to them.