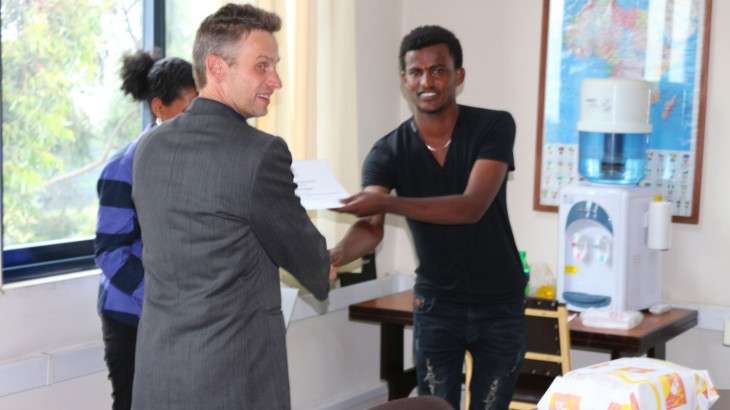 A law student from Dilla University in Ethiopia won the 2016 International Humanitarian Law (IHL) Essay Competition. Henok Ashagre's essay was voted the best out of 58 submissions from five east African countries. The competition which was themed, "Even wars have limits – Strengthening the compliance system of international humanitarian law," was organized by the ICRC.

Henok said that his interest in IHL goes beyond the courses set out in his law degree requirements. He recently participated in the Regional Moot Court competition in Arusha which inspired him to find out more about IHL.

"When I saw the invitation of the essay competition, I realized that it was a chance for me to read more on the field and contribute my part. I am glad my article won the competition," said Henok after receiving his certificate and award.

In his essay, Henok advocated for the establishment of new compliance systems which involve creating a distinct expert body to draft a periodic and public report on the compliance of IHL. The essay stressed the need to include armed groups because it claimed that the existing system's scope of applicability is limited to international armed conflict alone.

"The achievement of Henok will encourage other students to take part in similar competitions in the years to come," said Eyerusalem Teshome, ICRC's Legal Officer in Ethiopia. "Hopefully the participation of university students in such kinds of competitions will enhance the knowledge and respect of IHL by the next generation."

Weak compliance with existing norms and inadequacy of some of the norms to effectively prevent violation and protect victims is considered one of the pressing humanitarian challenges in today's world. Based on its mandate given by the international community the ICRC is promoting IHL worldwide through various activities including programs with universities and academic circles.

The prize was handed over to Henok by the ICRC Head of Delegation James Reynolds in a ceremony organized at the Addis Delegation.