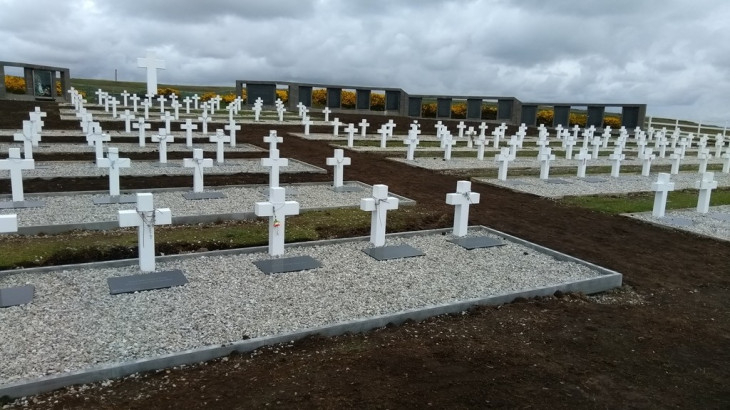 Geneva (ICRC) – The International Committee of the Red Cross (ICRC) has begun a second phase of forensic work to identify Argentine soldiers buried on the Falklands Islands (Malvinas).

The Second Humanitarian Project Plan (HPP 2) will involve the exhumation of human remains belonging to a number of individuals located within one grave known as C.1.10 at Darwin cemetery. The team will also assess an area called Teal Inlet/Caleta Trullo to investigate whether there is a grave that contains remains of Argentine soldiers.

This new phase follows the implementation of the First Humanitarian Project Plan (HPP 1), which led to the exhumation of the remains of 122 Argentine soldiers at Darwin cemetery. Following DNA sample testing with the families, 115 soldiers have since been identified. The HPP 1 was the first such project with a specific joint mandate from two States that had been on opposite sides in an armed conflict. "The main aim of this work is to allow the families to grieve with dignity," said the ICRC project manager of HPP 2, Laurent Corbaz. "They have had to endure so many years of uncertainty, so we will do whatever we can to provide them with answers. Families of those who have died in armed conflicts are entitled to have their loved ones identified – this is a requirement under international humanitarian law," he explained.

A team of six, including five forensic specialists, will exhume, analyze, sample and document the remains known to be buried in C.1.10. This grave had not been examined as part of HPP 1 as that project focused solely on unmarked graves, and since 2004 C.1.10 has been marked with the names of four fallen Argentine Soldiers. However, following HPP 1, it was confirmed that the remains of three of those four named soldiers rested elsewhere in the cemetery. This confirmed the need to clarify the identities of the human remains buried in C.1.10.

The dignity of the dead will be ensured throughout the forensic process. The human remains will be exhumed and carefully sampled in a temporary laboratory built on-site and managed by the ICRC for the purposes of the operation. Awaiting results of the analysis, they will then be temporarily buried in Darwin cemetery.

The analysis of the samples will be carried out by the Argentine Forensic Anthropology Team (Equipo Argentino de Antropología Forense, EAAF) in Córdoba, Argentina. Some members of the ICRC team will remain on the Islands pending results from the laboratory.The ICRC is undertaking this humanitarian mission strictly in accordance with its mandate. Further updates will be provided in due course.