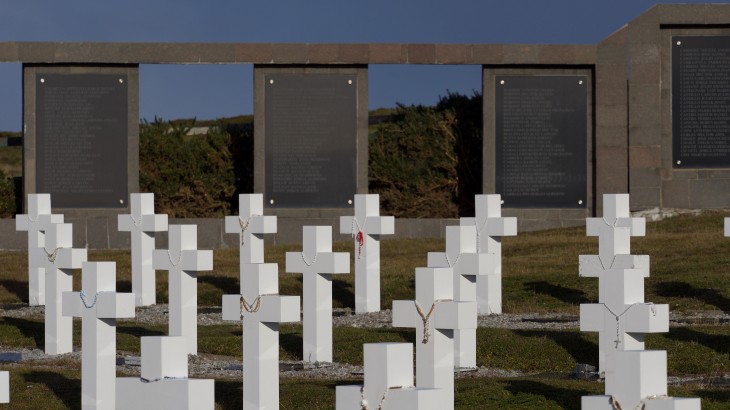 Geneva (ICRC) – The work of an ICRC forensic team to identify Argentine soldiers buried in Darwin cemetery came to an end on 7 August with a simple religious ceremony.

During seven weeks of intense work, which began on 20 June, a team of 14 specialists – from Argentina, Australia, Chile, Mexico, Spain and the United Kingdom – exhumed, analysed, sampled and documented the remains of each of the unidentified soldiers. The work was carried out in a high-tech temporary mortuary built on-site for the purposes of the operation. After careful analysis, each body was placed in a new coffin and reburied on the same day in the original grave. In the coming weeks the cemetery will be restored to its original state.

"I am pleased to say that we have successfully completed the crucial stage of exhuming, analysing, documenting and reburying each of the soldiers in a grave bearing the inscription Soldado argentino solo conocido por Dios (Argentine soldier known only unto God)," said the ICRC's forensic project coordinator, Morris Tidball-Binz. "We have striven to work to the highest scientific and technical standards, despite the logistical challenges involved. The team's wealth of experience in this kind of operation and the strength of their humanitarian commitment was what made it possible."

"We have treated the remains with the greatest respect and we hope, through our efforts, to give the dead back their identities and thereby bring answers to their families, who have spent more than three decades waiting for their loved ones' remains to be identified," added Mr Tidball‑Binz.

The second and final batch of samples for genetic analysis will be delivered shortly to the laboratory of the Argentine Forensic Anthropology Team (Equipo Argentino de Antropología Forense, EAAF) in Córdoba. The samples taken from the families for cross-referencing purposes are also held there. Two other laboratories, one in the United Kingdom and one in Spain, will carry out quality control on the DNA analyses.

The identification reports will be finalized by the end of the year and submitted to both governments. The Argentine authorities will contact the families who have requested the identification directly and confidentially to inform them of the results.

In December 2016, the governments of Argentina and the United Kingdom agreed to do their utmost to identify the remains of the soldiers killed in the 1982 conflict, in accordance with their obligation under international humanitarian law to identify those killed on the battlefield. That agreement resulted in the Humanitarian Project Plan, which entrusted the ICRC with the task of identifying the soldiers' remains.

The ICRC carried out this work in accordance with its humanitarian mandate. It is thereby meeting the needs and interests of the families and helping the parties fulfil their obligations, drawing on its vast experience in conflict-related forensic work.

The designations employed in this statement do not imply official endorsement or the expression of any opinion whatsoever on the part of the ICRC concerning the legal status of any territory, or concerning the delimitation of its frontiers or boundaries. Whenever a disputed territory is given different names by the parties concerned, the ICRC uses those names together, in French alphabetical order.