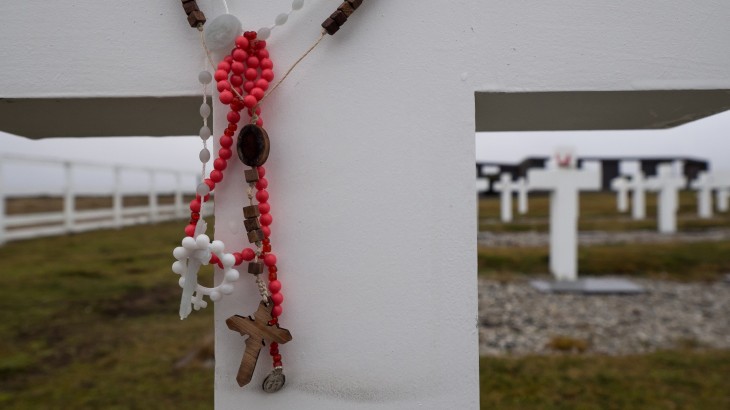 Geneva (ICRC) – The International Committee of the Red Cross (ICRC) has today handed out its forensic reports resulting from the work it carried out to identify the mortal remains of Argentine soldiers buried in Darwin cemetery.

"We are pleased that we can now match names to many of the unidentified soldiers, providing answers to many of the families who have been waiting for news for over three decades," said ICRC Director of Operations Dominik Stillhart. Speaking on behalf of the organization, Mr Stillhart applauded the calibre of the process, the commitment and support of all those involved, and the results achieved.

The forensic team identified 88 soldiers – the high success rate being the result of the thorough forensic identification process.

The results were presented to delegations from Argentina and the United Kingdom at the ICRC's headquarters in Geneva, during a meeting chaired by Mr Stillhart. The delegations were led by Ambassador Héctor Marcelo Cima from Argentina and Ambassador Julian Braithwaite from the United Kingdom. Also in attendance was Mr Claudio Avruj, secretary of Human Rights and Cultural Pluralism of Argentina.

In December 2016, the governments of Argentina and the United Kingdom agreed to do their utmost to identify the remains of the soldiers killed in the 1982 conflict, in accordance with their obligation under international humanitarian law to identify those killed on the battlefield. That agreement resulted in the Humanitarian Project Plan, which entrusted the ICRC with the task of identifying the soldiers' remains.

The ICRC carried out this unprecedented humanitarian forensic operation work in accordance with its humanitarian mandate. Its aim was to identify the dead and help meet the needs of the bereaved families, drawing on its vast experience in conflict-related forensic work.

From 20 June to 7 August a team of 14 specialists – from Argentina, Australia, Chile, Mexico, Spain and the United Kingdom – exhumed, analysed, sampled and documented the remains of each of the unidentified soldiers buried in graves bearing the inscription "Soldado argentino solo conocido por Dios" (Argentine soldier only known to God). The dignity of the dead was ensured throughout. Each of the bodies was exhumed, careful analyzed in a high-tech temporary mortuary built on-site and managed by the ICRC for the purposes of the operation, then placed in a new coffin and reburied on the same day in the original grave.

The genetic analysis of the samples and cross-referencing with the samples taken from the families were carried out in the forensic laboratory of the Argentine Forensic Anthropology Team (Equipo Argentino de Antropología Forense, EAAF) in Córdoba, Argentina. Two other laboratories, one in the United Kingdom and one in Spain, conducted quality control on the DNA analyses, which confirmed the reliability of the identification results.

The Argentine authorities will inform the families who requested the identification of their loved ones of the results directly and confidentially.

The designations employed in this statement do not imply official endorsement, nor the expression of any opinion whatsoever on the part of the ICRC concerning the legal status of any territory, or concerning the delimitation of its frontiers or boundaries. Whenever a disputed territory is given different names by the parties concerned, the ICRC uses those names together, in French alphabetical order.