The Life & Death campaign marked its 4th anniversary on World Humanitarian Day (19 August). The campaign's goal is to raise awareness of the serious consequences of violence against health-care workers and facilities. Similarly, other events and workshops took place from July to November 2015.

In July, the Commonwealth Red Cross and Red Crescent Conference on international humanitarian law was held in Canberra, Australia. It was co-hosted by the Australian Government, Australian Red Cross and the ICRC, and supported by the British Red Cross and the Commonwealth Secretariat. One morning session was dedicated to discussing issues related to Health Care in Danger (HCiD). Participants were given an update on the project, followed by a presentation by the Kenya Red Cross on its HCiD activities and a presentation by the Jamaican Ministry of Foreign Affairs and Foreign Trade on the role of States in protecting health care in armed conflict or other emergencies.

The Life & Death campaign marked its 4th anniversary on World Humanitarian Day (19 August). The campaign's goal is to raise awareness of the serious consequences of violence against health-care workers and facilities. Four years ago the Life & Death posters shot by the renowned war photographer Tom Stoddard were put up in various European cities to show the fatal consequences of violence against health care. In 2013, a short film on HCiD called The Human Cost was launched to further raise awareness. In 2014, a video game named Pilot Civilian Air Rescue on Missions won the HCiD special award for the Arma 3 contest. A unique opportunity to teach high-ranking officers about HCiD arose in Mons, Belgium, in September when the HCiD ambulance and photo exhibition were on display at NATO's Supreme Headquarters of the Allied Powers in Europe.

In August, the Austrian Red Cross and the ICRC organized a discussion on HCiD at the Alpbach Health Symposium in Austria. It was attended by representatives from the International Pharmaceutical Federation, the Swedish Red Cross and the HCiD project. The lively discussion was moderated by the secretary-general of the Austrian Red Cross, and provided an excellent occasion to foster relationships with people from different fields.

Some 350 medical students took part in a round-table entitled Gaza and Syria: Assistance in Situations of Armed Conflict in Madrid, Spain, in September. Moderated by the Spanish Foundation of Medical Colleges for International Cooperation, the discussion introduced the students to the challenges of providing health care in modern conflicts. Raising awareness among future doctors about this is vital to ensuring the safety of both sick and wounded people and health-care workers. A meeting on HCiD with the Spanish Red Cross also took place.

Two sessions on HCiD were held at the 75th World Congress of Pharmacy and Pharmaceutical Sciences of the International Pharmaceutical Federation (FIP) in Dusseldorf, Germany, in September. A joint FIP-ICRC session was held on the issue of violence against pharmacies. The second HCiD session entitled Finding the Humanitarian Face of Pharmacy looked at the solutions the pharmacy sector could implement to improve safety of health-care provision. Pharmacists are in direct and frequent contact with patients and potentially exposed to aggressive behaviour. 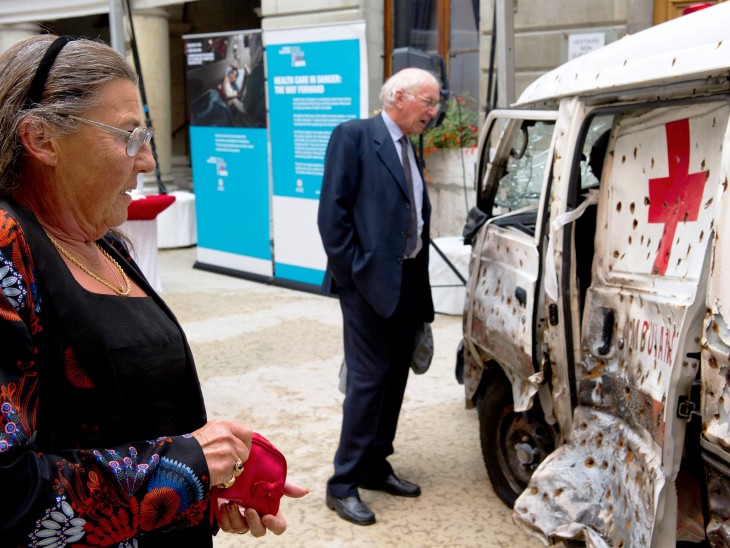 The Southern African Development Community (SADC) and the ICRC regional delegation in Harare, Zimbabwe, organized a seminar on the protection of health care during SADC peace support operations in September. 17 experts from 15 southern African countries discussed how to improve access to essential health services during peacekeeping operations. Recommendations were identified for the SADC Military Health Services, the SADC Standby Force and SADC Member States to help them prepare for and respond to health-related needs. Peacekeeping forces are required to protect and ensure the availability of health-care personnel, facilities and equipment during missions.

The security and safety of medical facilities was one of the topics in Chicago, USA, at the International Hospital Federation's 39th World Hospital Congress in October. Participants discussed how to ensure hospitals remain functional in emergencies and crises. The HCiD publication Ensuring the Preparedness and Security of Health-Care Facilities in Armed Conflict and Other Emergencies was presented at the event. Many participants were hospital managers, who are key to ensuring the safety of their personnel and therefore that of the patients.

A HCiD Working Group meeting was held in Moscow, Russia, during the World Medical Association General Assembly and Council Sessions in October. The participating countries were given an update on the HCiD project. The meeting was an excellent opportunity for strengthening ties and promoting the project among key individuals in the medical field from around the world.