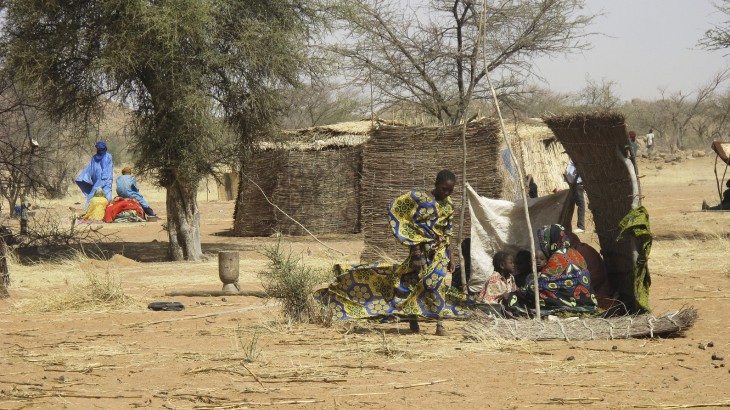 Ouagadougou - Fighting in the Sahel, centre-north and north regions of Burkina Faso has forced thousands of people from their homes in recent weeks.

In Soum province (Sahel), hundreds of farmers and their families had to flee to the province's capital Djibo.

"A lot of women and children left everything to escape the violence. They travelled by foot, cart or donkey to seek safety in the town and arrived with next to nothing," says Thierry Mugisho, the ICRC's coordinator of operations in Burkina Faso. "They had to leave their livestock behind and couldn't harvest their crops."

It is very difficult for these displaced people to make ends meet. Many of them are living with host families, and they come to an where the local population is already vulnerable to food shortages. "The population increase has put a lot of pressure on resources in Djibo, especially since it's hard to get supplies to the market at the moment," says Mugisho.

Since the start of the year, close to half a million people in Burkina Faso have been forced to flee the fighting.

Health-care workers have also had to leave the Sahel and centre-north regions because of the security situation. There are now 12 times more closed or partially working health centres than there were just eight months ago. As a result, close to half a million people have little or no access to health care. We've also recorded a number of violent incidents that have directly affected health-care workers, their belongings and their vehicles.

Since January, the ICRC and the Burkinabe Red Cross have distributed food to more than 50,000 displaced people in the Sahel and north regions, which have been heavily affected by the fighting. We are currently delivering aid in four municipalities in the north region and will make further distributions in Djibo as soon as possible. Most of the supplies will go the new arrivals, as they are the most vulnerable, but other displaced people will also receive further aid.

As livestock are the main means of survival for many families, we organized a vaccination campaign for 68,000 cattle in Oudalan province (Sahel) in early 2019. A campaign to vaccinate a further 350,000 livestock will begin on 1 November.

We've also drilled four new boreholes and restored other water points in the Sahel and east regions of the country, which means that more than 10,000 displaced people and their host families now have better access to drinking water. We also built 60 toilets and showers in those two regions.