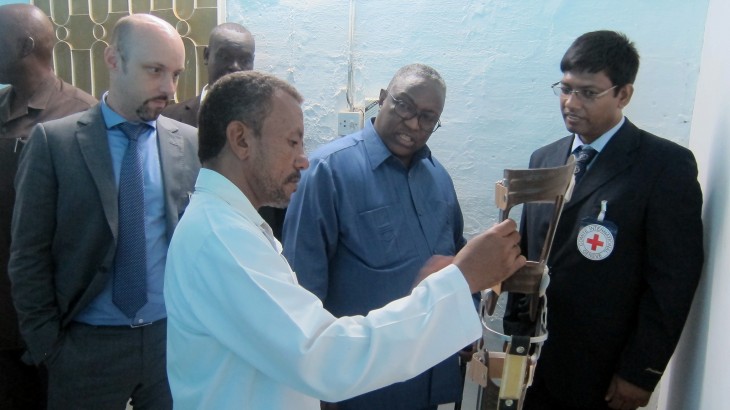 A member of the prosthetist and orthotist technical staff demonstrates an orthosis to the H.E. Vice President (second from right). Also present are the ICRC’s head of delegation (left) and its physical rehabilitation programme manager (right). CC BY-NC-ND / ICRC

The International Committee of the Red Cross (ICRC) has extended its support of physical rehabilitation centres in Sudan to a seventh facility, in El Obaid in North Kordofan State.

The ICRC offered additional support to the Sudanese National Authority of Prosthetics and Orthotics (NAPO) to set up the new centre. The ICRC has been supporting NAPO for more than 25 years.

"The Government of Sudan appreciates the ICRC's substantial contribution in providing support to persons with physical disabilities in various parts of the country," H.E. Hassabu Mohamed Abdulrahman, the second Vice President of Sudan, said at the July 24 inauguration of the new facility.

The new centre is expected to serve the needs of persons with disabilities from North Kordofan, West Kordofan and part of South Kordofan States. When fully operational, it will be able to provide services to about 60 people per month. The city of El Obaid is well connected with Khartoum as well as areas affected by armed conflict in southern parts of Sudan.

The ICRC has been supporting one referral centre in Khartoum and six state centres in Nyala, Dongola, Kassala, Gadaref, Kadugali and Damazine. The ICRC assisted in the opening of the new centre by helping identify a location, setting up infrastructure, supporting its management with technical advice and by donating machines and equipment. The ICRC is now providing training for the centre's technical staff to manage it efficiently.

Fillion assured those in attendance that the ICRC would continue to support the Government of Sudan in providing rehabilitation services to people with physical disabilities in the country.