Indonesia: Naval officers from the Asia-Pacific debate the law of naval warfare 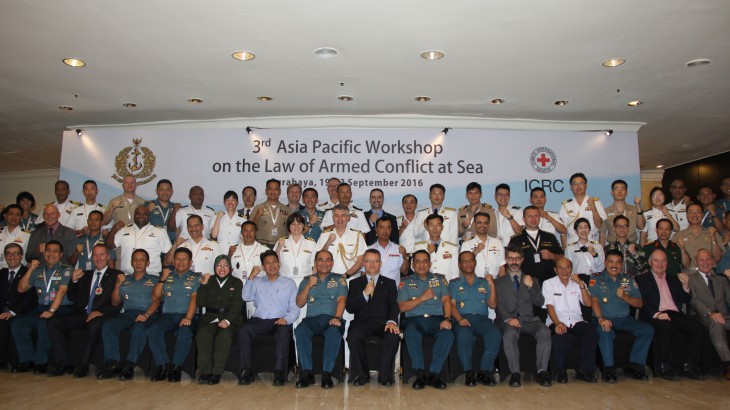 Surabaya (ICRC) – The Indonesian Navy and the International Committee of the Red Cross (ICRC) today opened the third Asia Pacific Workshop on the Law of Armed Conflict at Sea in Surabaya. The aim of this five-day event is to facilitate operational dialogue on maritime security issues, especially on the laws of naval warfare.

"Maritime and territorial disputes feature prominently in the Asia-Pacific Region", said Christoph Sutter, who heads the ICRC's regional delegation for Indonesia and Timor-Leste. "If tensions continue to rise, there could be an increasing risk of clashes at sea in a region which has the world's busiest maritime trade route," Mr Sutter added. "Naval forces in the region are already routinely involved in a range of maritime operations. Through such events, the ICRC is seeking to share with the participating countries its expertise on law of naval warfare and stimulate exchanges on its applicability in the region."

The workshop will also cover other maritime security operations, which are below the threshold of armed conflict, such as anti-piracy, rescue and movement of people at sea.

"This is a rare opportunity to exchange our ideas so that we acquire a better knowledge and understanding of those particular issues," said Admiral Ade Supandi, Chief of the Indonesian Navy. "It will also allow us to identify the challenges and opportunities regarding cooperation in our region, especially as regards the application of the laws of armed conflict."

The sessions will be facilitated by military experts from Indonesia, England and Australia, together with ICRC armed forces delegates and law of the sea specialists.