Lake Chad: 'Not a day goes by without a child dying of malnutrition' 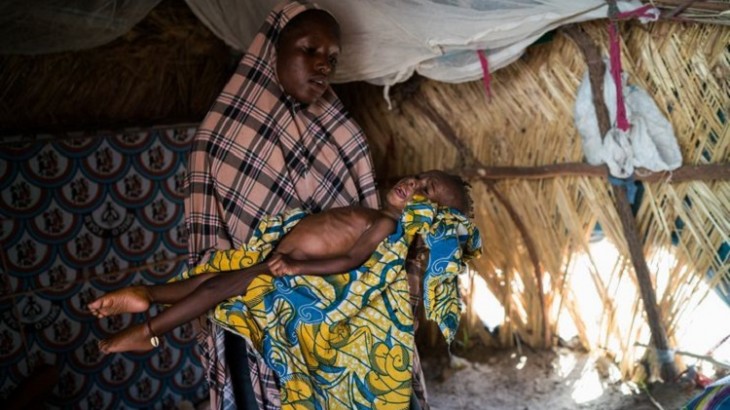 Twelve-month-old Aboubacar Aboubacar is held by his cousin in the small hut where the family lives in Muna IDP settlement on the edge of Maiduguri. Mackenzie Knowles-Coursin/ICRC

The International Committee of the Red Cross (ICRC) says over 9 million people are in urgent need of aid in the Lake Chad region of Africa. More than 2.4 million people have fled their homes in four countries, Niger, Chad, Cameroon and Nigeria because of the conflict between government forces and armed opposition, which has lasted six years.

The situation is now deteriorating further, especially in north-eastern Nigeria, and the ICRC is scaling up its humanitarian activities throughout the region.

"There is a critical shortage of food. We can barely imagine the scale of hunger in some areas where humanitarian aid has not yet reached. Children are suffering especially. Not a day goes by without a child dying of malnutrition," said the ICRC's director of operations, Dominik Stillhart.

A string of attacks in Niger's Diffa region during the last few days has led to around 50,000 people fleeing their homes. In north-eastern Nigeria, hundreds of displaced people are still arriving at different locations in search of shelter and food. In many cases, the evolving conflict across the region drives people to flee on multiple occasions, increasing hardship and making life extremely precarious. Most abandon their homes leaving everything behind, and lack the very basic necessities of life.

Since the beginning of the year, the ICRC and the local Red Cross Societies have distributed food to more than 300,000 displaced people and returnees in Nigeria, Cameroon and Niger, while 15,000 displaced people have received emergency shelter in Adamawa and Borno State in Nigeria. With access to health-care limited, ICRC surgical teams are supporting Diffa and Maiduguri hospitals. More than 800 patients, most of them war wounded, have received life-saving emergency treatment since January 2016.

With more and more people arrested due to the conflict, detention services are increasingly under strain. The ICRC visits detainees across the region to monitor treatment and conditions, which includes addressing cases of malnutrition.

"We are one of the few organizations present on the ground, with the capacity to act quickly. Our access to people affected by the conflict is growing, so we are reaching more and more people in desperate need. We have to provide more aid, especially food, otherwise more people will die," said Mr Stillhart.