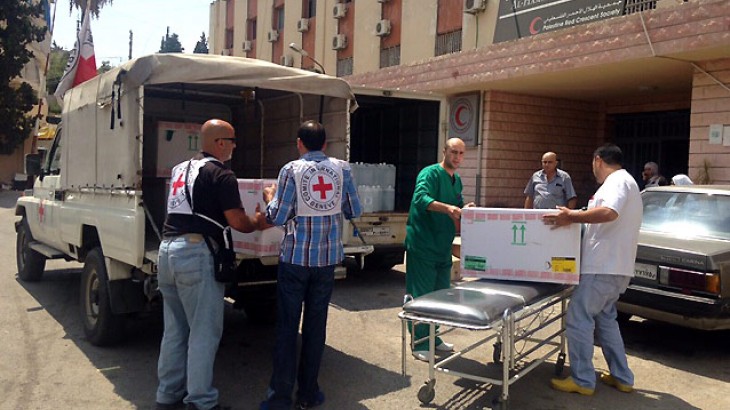 Beirut / Tyre (ICRC) – Clashes in Ein el-Helweh Palestinian refugee camp in Lebanon's southern district of Saida have been among the fiercest in recent years and resulted in many casualties. The International Committee of the Red Cross (ICRC) today distributed surgical and other medical supplies to several health-care facilities treating the wounded inside and outside the camp. One of the wounded was transferred to the ICRC's Weapon Traumatology and Training Center in Tripoli. In addition, the ICRC today distributed drinking water, jerrycans and hygiene kits to 35 families who fled the violence in the camp and found refuge in mosques.

During the clashes, the ICRC arranged for people to be taken to nearby health-care facilities, working hand in hand with other organizations – such as the Palestine Red Crescent, Human Call and the Islamic Health Organization – and various hospitals and clinics in Saida district.

"The camp is overcrowded and the streets are too narrow for ambulances to pass. Evacuating the wounded is really difficult, especially when there's heavy fighting. We have to coordinate with various groups," said Agnieszka Kurkiewicz, an ICRC delegate covering Ein el-Helweh. "We are very concerned about the safety of health workers who may be attacked or caught in the crossfire. During the clashes, one ambulance was shot at and another trapped between fighting groups. Medical personnel must be protected at all times and the wounded allowed to seek medical care when and where they need it."

The ICRC has been working in Ein el-Helweh Palestinian refugee camp for decades. It currently runs programmes among various factions in the camp to raise awareness about humanitarian principles and the protection of medical facilities, workers and patients. It provides first-aid training in the camp to improve people's chances in the event of injury. It has also set up two first-aid posts in the camp and supports three health-care facilities where people can receive treatment before being referred to hospitals outside the camp.