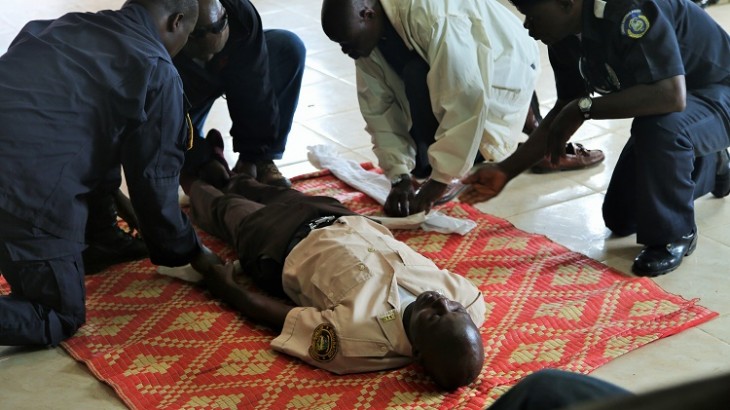 Monrovia (LNRCS/ICRC) – Nearly 1,250 Liberian law enforcement and fire service officials have trained in basic first aid this year with the help of the Liberian Red Cross (LNRCS) and the International Committee of the Red Cross (ICRC).

The first aid courses underscored the need for an immediate medical response to injuries sustained in emergencies. The trainings provided new skills and increased confidence to act to prevent or manage life-saving emergencies.

"First aid is particularly important as an initial response in providing effective and swift care that can reduce injury and improve chances of survival," said Julien Lerisson, ICRC Head of Delegation in Liberia. "The ICRC's aim is to assist law enforcement officials in strengthening their ability to provide emergency assistance."

"Security officers are often the first responders to accidents, and having the requisite skills to act immediately can help save lives and reduce the impact of the injury," said Ambullai Perry, Director of Programs of the LNRCS.

The officers were enthusiastic about their new skills and demonstrated a high degree of confidence during the practical aspects of the training. The National Police Training Academy and Bureau of Immigration and Naturalization also assisted with the trainings.