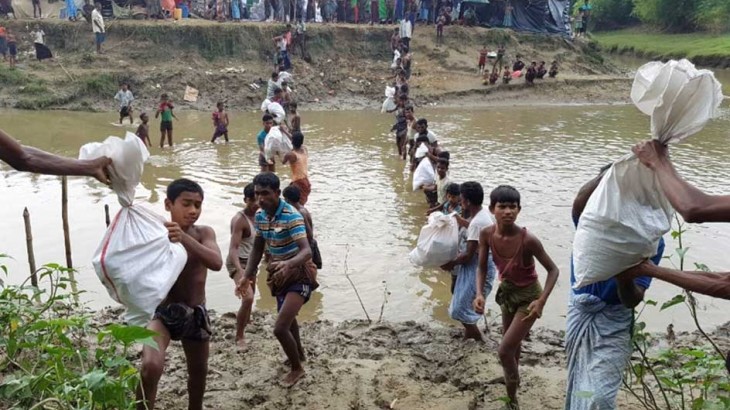 Geneva/Myanmar/Bangladesh (ICRC) – The International Committee of the Red Cross (ICRC) in Myanmar and Bangladesh is scaling up its efforts to minimize the suffering of people fleeing violence.

"All communities affected by the violence are suffering, and the ICRC is deeply concerned about the condition of families hit by this crisis," said Boris Michel, the regional director of ICRC's Asia and Pacific zone.

The ICRC this week began delivering food and water to around 8,000 families on both sides of the Myanmar-Bangladesh border who fled their homes to escape violence. An ICRC-supported mobile health team of Bangladeshi doctors and paramedics has been dispatched to the region in Bangladesh.

The ICRC is working closely with the Myanmar Red Cross (MRCS), the Bangladesh Red Crescent Society (BDRCS), and community volunteers to respond to this emergency. Red Cross teams are helping family members who have lost contact with each other on both sides of the border by offering telephone calls, "safe & well" messages, as well as requests to help find family members who are missing.

The ICRC and BDRCS have been supporting two Bangladesh government health facilities in Teknaf and Ukhiya sub-districts since the beginning of the influx of people into the city of Cox's Bazar, improving delivery of health care services to the host communities and the people arriving.

In the Rakhine State of Myanmar, the ICRC, MRCS and Red Cross Movement this past week have assisted more than 10,000 people with first aid, medical supplies, clean water, food and other emergency items.

"We are doing our best to address the needs of all people and communities affected by this tragic situation," said the ICRC's Boris Michel. "The combination of the monsoon season and the fact that people fled their homes with few belongings make it almost unbearable to live."

The ICRC has been operating in Cox's Bazar of Bangladesh since 2014 and throughout the state of Rakhine in Myanmar since 2012. In April and May the ICRC supported more than 19,000 Muslims fleeing from Rakhine who were staying in host communities in Teknaf sub-district in Cox's Bazar. In Rakhine, the ICRC works throughout the state carrying out a range of activities, including health, livelihood, protection and water and sanitation.