Philippines: Discussions on the relevance of Islamic Law and IHL in addressing challenges in armed conflict 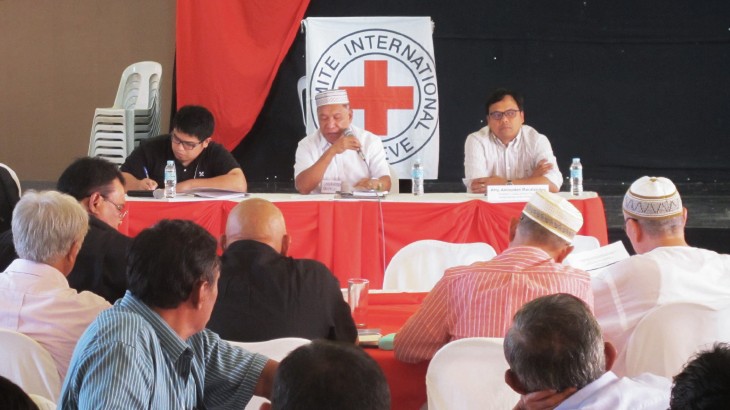 To encourage further support in upholding the protection of civilians and human dignity during times of armed conflict in the Philippines, the International Committee of the Red Cross (ICRC) organized a series of seminars across the country that brought together a diverse mix of religious scholar’s academics, lawyers, students and local civil society groups.

In December 2017, the ICRC held four one-day conferences in the cities of Manila, Iligan, Cotabato and Zamboanga; all of which were attended by representatives from the religious, academic and civil society groups, and law practitioners. The main objective of these events was to review relevant aspects of the Islamic law of armed conflict and the International Humanitarian Law (IHL) that share the common goal of protecting human dignity during times of war, and explore possible points of convergences that could help address the emerging contemporary challenges.

Dr Ziaullah Rahmani, an ICRC Islamic scholar from Pakistan, was the keynote speaker at each event and led lively discussions about the interpretation of Islamic International Law (Siyar), its historical roots and its similarities and differences with IHL.

This is the third year of the ICRC organizing such an event in the Philippines. It also came in timely following the recent armed clashes between government security forces and the Islamic State group Ranao.

The seminar held in Iligan, co-organized with Marawi-based King Faisal Centre at Mindanao State University, took place as the communities in and around Marawi begin to rebuild after five months of intense violence. The event served as a venue for leaders from relevant sectors to discuss crucial issues and concerns surrounding their situation. Notable speakers who recounted their personal experiences, as well as the devastating humanitarian consequences of the conflict, include: Aleem Samanodin Ampaso, Mufti of the Muslim Mindanao Ulama Council; Ms Aleema Nur-Aisyah Pundoma, President of Majlisunnisa Al Muslimat; and Rev. Edwin De la Pena, Vicar Apostolic of Marawi.

In Cotabato City, participants have raised relevant questions about the representation of the red cross emblem, conduct of hostilities, status of children in war, and the principle of proportionality. The event served as a good opportunity for the ICRC to correct misconceptions, clarify our role and improve our acceptance in the community.

Speaking at the Manila event, Dean Macrina Adjerol Morados, of the Institute of Islamic Studies at the University of the Philippines, was able to highlight the crucial role universities play in promoting greater respect for IHL and universal humanitarian values. Aisha Flores Malayang, Balik Islam (Muslim reverts) Commissioner on the National Commission on Muslim Filipinos, also raised the question about the status and special protection afforded to women and children at times of war.