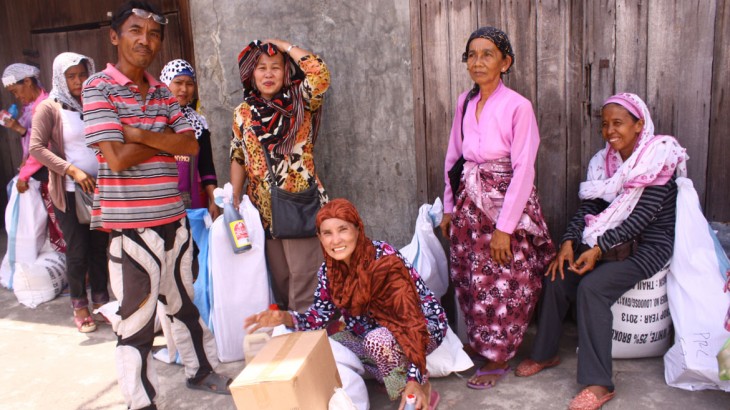 Each displaced family received 25 kilograms of rice, 12 tins of sardines, 5 litres of oil, 1 litre of soy sauce, 1 kilogram of sugar, half a kilogram of salt, 300 grams of coffee and a hygiene kit. CC BY-NC-ND / ICRC / L. dela Cruz

Manila (ICRC) – More than 63,000 people, displaced by the month-long fighting in March between government security forces and armed groups in Maguindanao province (Mindanao), received relief assistance distributed by the Philippine Red Cross (PRC) and the ICRC.

"While many families have since returned to their homes, thousands remain scattered in evacuation centres. We supplemented the support given by the authorities because the prolonged displacement has had an impact on people's livelihoods, putting a strain on their ability to meet their basic needs," said Sabine Gralla, head of the ICRC office in Cotabato. "In addition, the majority of them rely on farming, which has been adversely affected by the dry spell."

Each family received 25 kilograms of rice, 12 tins of sardines, 5 litres of oil, 1 litre of soy sauce, 1 kilogram of sugar, half a kilogram of salt, 300 grams of coffee, and a hygiene kit. These should support a household of six people for one month.

"This is a big help for all evacuees, especially those of us who have returned to our village. Our fields and crops have since dried up, so we have to start from scratch. It will take some time before we can replant," explained Mariam Talusan Sulaiman of Malangog village in Datu Unsay.

Over 60 PRC volunteers and ICRC staff were involved, using a new electronic registration system that reduced the registration time for beneficiaries and accelerated the distribution of relief. Community leaders also played a major role in validating the identities of those who were unable to present identification documents.

Meanwhile, the ICRC continues to provide displaced persons with 110,000 litres of potable water daily from 49 tanks installed in 27 evacuation sites.