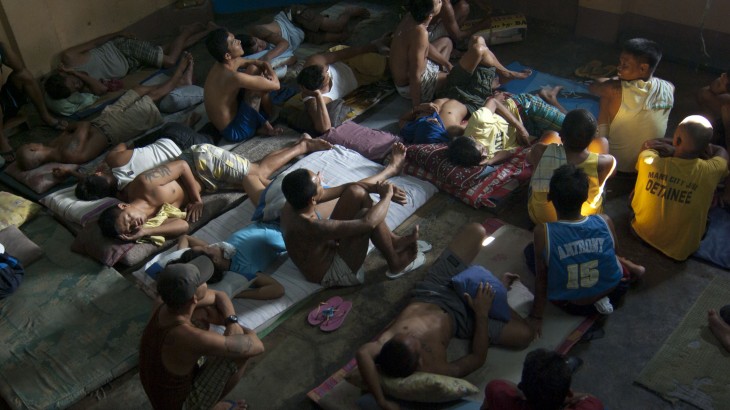 The ICRC visits places of detention throughout the country to assess the treatment and living conditions of people deprived of their liberty. It supports the authorities in their efforts to improve detention conditions. CC BY-NC-ND / ICRC / L. Piojo

Manila (ICRC) – As part of ongoing efforts to reduce jail congestion, an electronic system for computing inmates' good conduct time allowance will be rolled out by the Bureau of Jail Management and Penology (BJMP) in six pilot jails.

To support these efforts, the International Committee of the Red Cross (ICRC) today donated seven computers to the BJMP for the deployment of the Electronic Time Allowance Calculator (e-TAC) system.

"This software system will help the BJMP improve the accuracy and speed of computing good conduct credits. This credit system encourages good behaviour behind bars, giving inmates the possibility of release before serving their full sentence," said Vincent Ballon, the ICRC delegate in charge of the programme with the BJMP. "Its effective implementation will help decrease congestion in BJMP jails by enabling jail staff to better monitor inmate data," he added.

The ICRC takes a holistic and multidisciplinary approach to its work on behalf of people deprived of their freedom. It works in various aspects of detention, such as the detainees' access to water and health care, living conditions and judicial guarantees, and then works with the authorities to bring about tangible improvements in the detention system and detainees' conditions and treatment.

Republic Act No. 10592 of 2014, an amendment to the Revised Penal Code, extended the good conduct time allowance – "credit for good behavior" – to all inmates, including those under trial. Currently, over 86,000 people are detained in 459 BJMP jails, which have an actual capacity of about 20,000. The reduction of overcrowding is one of the priorities outlined by the BJMP in its 2014-16 roadmap.

The ICRC, a neutral, impartial and independent humanitarian organization, has been visiting detainees in the Philippines for over 60 years. Since 2007, it has been supporting the detaining authorities, including the BJMP, in reducing jail overcrowding by addressing its causes, and in alleviating the consequences on detainees.