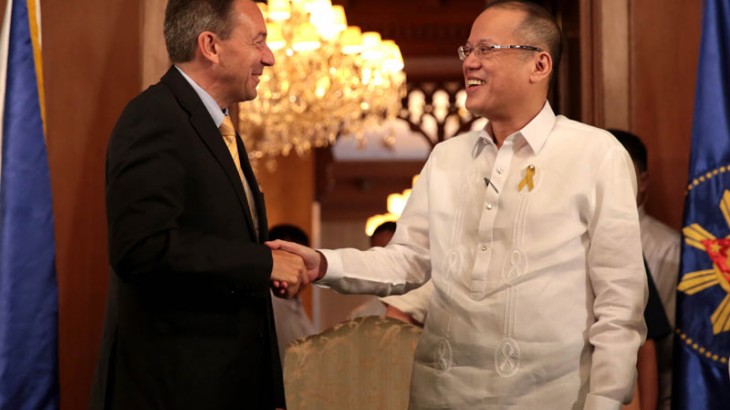 Geneva/Manila (ICRC) – Peter Maurer, president of the International Committee of the Red Cross (ICRC), concluded his first official visit to the Philippines today. During his three-day stay, Mr Maurer met with the Philippine president, Benigno Simeon Aquino III, and other high-level officials to discuss the humanitarian situation in the country, notably the challenges faced by the thousands of people who remain displaced in Zamboanga City.

"I left Samar impressed by the resilience of the people I met there. In the hardest-hit areas, some survivors still need help to rebuild their homes and incomes," he said. "During my meetings with government officials in Manila, I reiterated the need for a durable solution for displaced people in Zamboanga, who are still living in difficult conditions nearly a year after the fighting came to an end in the city. I also underlined the ICRC’s commitment to help communities in different parts of the country to recover and rebuild amid long-standing cycles of violence and poverty."

In the meetings, the ICRC president also discussed an initiative launched with the national authorities in 2007 to tackle overcrowding and improve health conditions in prisons. With overcrowding still a serious issue in many facilities, Mr Maurer pledged ongoing ICRC support and urged officials to continue their efforts.

"The relationship we have built up with the authorities in the Philippines is very constructive and allows for frank exchange on the issues that matter, which is essential to our work," he said. "I am also convinced that the ICRC’s strong operational partnership with the Philippine Red Cross will continue to be indispensable to our efforts to respond promptly and efficiently to disasters, whether man-made or natural."

The ICRC provides a wide variety of humanitarian services in the Philippines, aiming for example to improve people's access to water, their livelihoods, and the health care available to them. In addition, ICRC delegates visit detainees across the country, particularly those held in connection with hostilities between the government and armed groups. The organization has carried out humanitarian activities in the Philippines since the Second World War and has had a permanent presence in the country since 1982.