Philippines: ICRC steps up response to needs linked to fighting in Marawi City 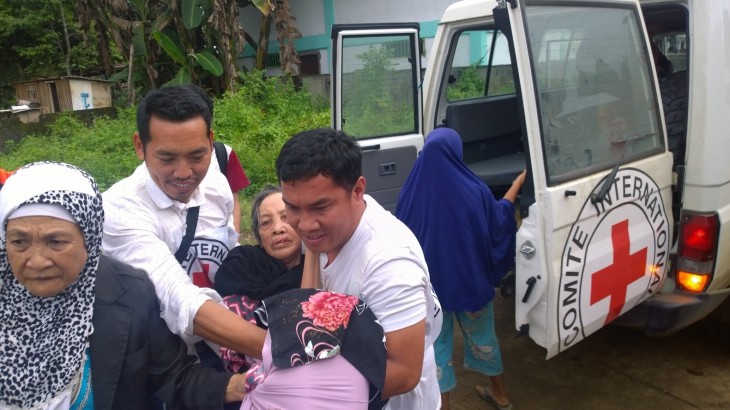 The ICRC transported at least 300 displaced people from Marawi to Saguiaran evacuation center, prioritizing the most vulnerable. ICRC photo

Thousands of people continue to flee the fighting in Marawi City in Lanao del Sur province, southern Philippines, seeking safety in neighboring areas such as Iligan City. Many families are staying with relatives, while others went to evacuation centers or sought shelters in schools.

"This morning, our team has finally entered Marawi City and delivered 1,000 water jugs to the displaced families at the provincial capitol, and transported at least 300 residents from Marawi to the evacuation center in Saguiaran. We were able to access Marawi as we are in touch with various stakeholders," said Pascal Porchet, Head of Delegation of the International Committee of the Red Cross (ICRC) in the Philippines.
"The situation is very fluid. Residents are moving in and out of Marawi, and we are seriously concerned about those who are trapped or have chosen to stay in the city, who are in need of food and water. This is currently a challenge for our teams on the ground as they assess the situation in order to have a clear picture of the number of displaced people and their needs," he added.
In Iligan, the ICRC has prepositioned medical supplies to reinforce the capacity of rural health units in addressing the basic health needs of displaced people. They include basic medicines, antibiotics, dressing materials; as well as injectable medication and intravenous fluids that can support 30,000 people in three months. One of these kits will be delivered to the RHU in Saguiaran this afternoon.
Medical items to treat wounded people have also been dispatched, for hospitals that may need replenishment. In addition, food, essential household items and hygiene kits will be dispatched to Iligan from the ICRC warehouse in Davao this afternoon for prepositioning.
The ICRC also provided first-aid bags and dressing kits to support the Philippine Red Cross (PRC) chapters in Marawi and Iligan cities. It has also provided resources for the mobilization of PRC's volunteer force in case a greater response is needed. The PRC and the ICRC will coordinate the response according to the needs. The PRC is ICRC's primary partner in the country.
With the ongoing hostilities in Marawi City, and with some residents remaining there, Porchet urged those involved in the fighting to take the necessary precautions to spare civilians and their property.
"International humanitarian law (IHL) remains applicable in this situation, even after the declaration of martial law in Mindanao. As such, it must be respected at all times and by all the parties. People who may be arrested must be treated humanely and the ICRC will continue to monitor their conditions and treatment," he said.
IHL limits the means and methods of warfare and protects people who do not take part in the fighting (i.e civilians, medics, aid workers) and those who can no longer fight (i.e. wounded, sick, captured or detained fighters). These limits are particularly meaningful in populated areas where the risk of harm to civilians and civilian objects, including essential infrastructure, increases.
The ICRC is a neutral, impartial and independent humanitarian organization that protects and assists victims of armed conflict. It has an international mandate to promote knowledge for and respect of IHL.