Recent developments of the interplay between IHL and IHRL 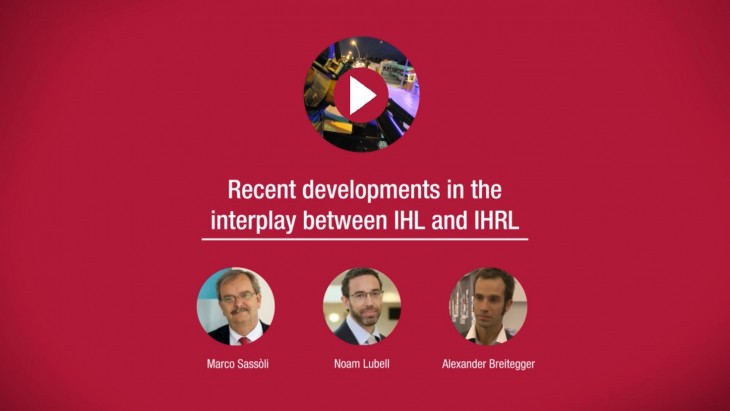 The interplay between IHL and IHRL: An introduction to recent developments

IHL and international human rights law (IHRL) are distinct but complementary bodies of law. They are both concerned with protecting the lives and dignity of individuals. IHL applies during armed conflict only, while human rights law generally applies at all times, in peace and during war.

The application of IHRL to situations of armed conflict is complicated by a number of issues: the differences in the ways IHRL and IHL protect persons; the extent to which IHRL can be applied to armed conflicts taking place outside the territory of the parties concerned; whether non-State parties are bound to apply IHRL in non-international armed conflicts; and the extent to which States may derogate from certain of their obligations under IHRL, in particular those related to detention.

In addition, the simultaneous application of IHL and IHRL, and the principles that should govern the interplay between these two bodies of law, continues to be the subject of debate. The use of the lex specialis principle, to regulate this interplay, has also been discussed at great length: many different interpretations of the principle have been put forward by States, international courts and experts in international law.

The interplay between IHL and IHRL becomes a particularly critical issue in certain situations: for instance, when peaceful protests during a period of armed conflict take a violent turn, because of fighters mingling with peaceful protesters; when force is used against isolated fighters in non-international armed conflicts; or on the question whether and when an enquiry has to be conducted after a person has been killed. In those situations, both the law-enforcement and/or the conduct-of-hostilities paradigms can be used to guide the response of State agents. However, applying one instead of the other, or both at the same time, can provide radically different results and create issues for the protection of the people concerned.

Another issue that has been the subject of intense discussion is whether IHL applicable to non-international armed conflicts provides the legal basis required under IHRL to lawfully deprive individuals of their liberty for non-criminal detention on account of those individuals posing an imperative threat to security (internment). The answer has crucial legal and practical implications for detained individuals, detaining States and implementing mechanisms for both IHL and IHRL.

All these matters have started to be addressed at national, regional and international levels in various ways: through experts’ meetings, by rapidly evolving case law and in landmark judicial decisions. The breadth and depth of the ensuing debate has made it possible to frame issues and questions relating to the interplay between IHL and IHRL more precisely. The hope is that all this will also yield pragmatic solutions for implementing legal obligations in a way that strengthens protection for people affected by armed conflict.

IHL is part of international law, the body of rules governing relations between States. International law is contained in written agreements between States – treaties or conventions – in customary rules, which consist of State practice considered by them as legally binding, and in general principles.

IHL applies to armed conflicts. It does not regulate the legality of the use of force by a State in the first place; an important, but distinct, part of international law set out in the United Nations Charter does that. Hence, IHL imposes obligations equally on all parties to armed conflicts (equality of belligerents), irrespective of whose force was legal or not under the UN Charter. The main sources of IHL are the four Geneva Conventions of 1949, their Additional Protocols of 1977 and 2005, and other treaties concerning the regulation of weapons and protection for specific persons and objects, as well as a number of customary rules.

IHRL
IHRL is a set of international rules, established by treaty or custom, on the basis of which individuals and groups can expect and/or claim certain behaviour or benefits from governments. Every person, simply as a consequence of being human, has certain basic entitlements: these are called ‘human rights’. Numerous non-treaty-based principles and guidelines (‘soft law’) also belong to the body of international human rights standards.

The following are the main treaty sources of IHRL: the International Covenants on Civil and Political Rights (1966) and on Economic, Social and Cultural Rights (1966), the UN Conventions on Genocide (1948), Racial Discrimination (1965), Discrimination Against Women (1979), Torture (1984) and the Rights of the Child (1989). The main regional instruments of IHRL are the European Convention for the Protection of Human Rights and Fundamental Freedoms (1950), the American Declaration of the Rights and Duties of Man (1948), the American Convention on Human Rights (1969), and the African Charter on Human and Peoples' Rights (1981).

At the end of the series, lecturers and trainers will be able to do the following:

2. Videos: the entire session can then be watched all at once, or chapter by chapter, depending on the user’s needs and interests. Videos can also be watched and discussed in class, as an introduction to the topic.

3. Teaching tools: ICRC tools for teaching IHL, and specific, ready-to-use teaching materials on the interplay between IHL and IHRL, are available. Lecturers and trainers are encouraged to use them to incorporate the topic in their courses or training sessions.

4. Further reading and resources: lecturers and trainers are encouraged to explore further the interplay between IHL and IHRL, and related matters, via additional resources (ICRC statements, publications, reports, etc.). Researchers may wish to use them as sources of information for their projects.

Alexander Breitegger, ICRC
Alexander Breitegger has been a legal adviser in the Thematic Legal Advice Unit at the ICRC since February 2011, and has been working on various subjects, among them the relationship between IHL and IHRL. He regularly attends sessions of the UN Human Rights Council to follow issues of interest to the ICRC. His other areas of interest and responsibility include legal protection for health care, particular in the context of the ICRC-facilitated Health Care in Danger project of the International Red Cross and Red Crescent Movement. Between 2012 and 2014, he took part in most of the experts’ meetings associated with the project. He has also provided legal support in a variety of multilateral negotiations involving the ICRC on the issue, including on Resolution 4 on Health Care in Danger adopted at the 32nd International Conference in 2015 and on UN Security Council Resolution 2286 on the protection of civilians dedicated exclusively to the protection of medical care in armed conflict.

Noam Lubell, University of Essex / Geneva Academy of International Humanitarian Law and Human Rights
Noam Lubell is a professor in the School of Law at the University of Essex, and was Head of the School from January 2014 to January 2017. He has taught at academic institutions in various countries and has worked as an adviser on international law for numerous non-governmental organizations, and as director of a project on prisoners and detainees. He has also served as a consultant and provided training for such organizations as Amnesty International, various government bodies, and the BBC. He is the Rapporteur of the International Law Association's Committee on the Use of Force, and holds the Swiss Chair of International Humanitarian Law at the Geneva Academy of International Humanitarian Law and Human Rights. He has published on a variety of topics, such as self-defence, new technologies, and the scope of the battlefield, and is the author of Extraterritorial Use of Force Against Non-State Actors (Oxford University Press).

Marco Sassòli, University of Geneva / Geneva Academy of International Humanitarian Law and Human Rights
Marco Sassòli is a professor of international law at the University of Geneva. He is also an associate professor at the University of Quebec in Montreal, Canada, where he taught from 2001 to 2003. Mr. Sassòli is a commissioner of the International Commission of Jurists. He worked for the ICRC from 1985 to 1997, inter alia, as deputy head of its legal division, head of its delegations in Jordan and Syria, and as protection coordinator for the former Yugoslavia. During a sabbatical leave in 2011, he rejoined the ICRC as legal adviser to its delegation in Islamabad. He has also served as registrar at the Swiss Supreme Court.

The course is divided into a number of sessions. Click on a title to watch the video:

How Does Law Protect in War?
Book chapters and highlights