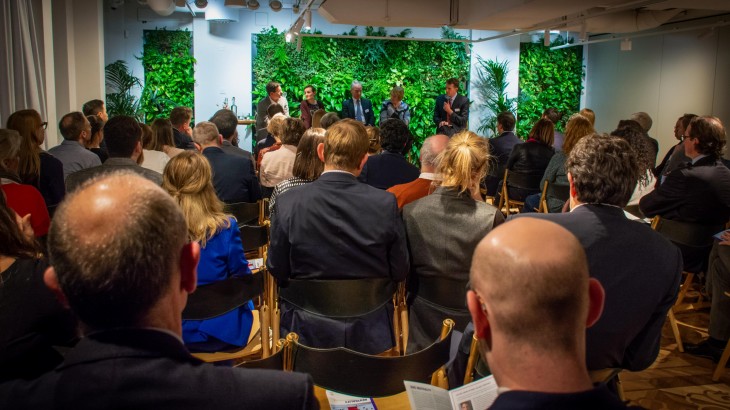 For 70 years international humanitarian law (IHL) has sought to limit the consequences of war and protect people in conflict zones. But in an age of changing warfare, is IHL still fit for purpose?

That was the subject up for discussion in London this week where a distinguished panel of experts examined whether the rules of war, and indeed the ICRC's own neutrality, can still serve to protect civilians affected by conflict, both today and in the future.

Broadcaster and historian Dan Snow, who visited Mali earlier this year with the ICRC, chaired the discussion and began by inviting the panel to reflect on the value of the Geneva Conventions.

Cordula Droege, chief legal officer at the ICRC, said: "What we see in the news is what doesn't work in IHL... but equally we see every day how the Geneva Conventions do work and do protect civilians."

General Lord Richards, former head of the UK armed forces, added: "War is vicious enough as it is, but these rules keep the lid on what might be some excesses."

This year marks the 70th anniversary of the Geneva Conventions. In that time, the conduct of hostilities has changed significantly and continues to evolve with the advent of new technology such as autonomous weapons.

For the ICRC, a weapon system that is able to make a 'decision' about who to kill poses an immediate concern from a humanitarian, legal and ethical perspective, given the risk of loss of human control over weapons and the use of force.

The ICRC has been urging States to identify practical elements of human control as the basis for internationally agreed limits on such systems, a point echoed by Richard Moyes, managing director at Article 36, during the discussion.

"There needs to be limits on autonomy in weapons... This isn't about the Terminator... it's about how do we apply constraints to very pressing current technologies."

The discussion moved on to look at the proliferation of armed groups in conflict, urban warfare and the challenge the ICRC faces in maintaining its neutrality.

Droege said: "You have to fight for this humanitarian space every day by doing neutrality, not saying it. The more parties to the conflict you have, the more difficult it becomes."

Speaking after the event, Mark Brailsford, the ICRC's deputy head in the UK and Ireland, gave his reflections on the debate.

He said: "It was clear the panellists agreed on the continued relevance of IHL and the need for neutral humanitarian action on today's battlefields, and indeed the battlefields of the future.

"Although the character of conflict may change as technology advances, the rules that limit the consequences of conflict on humanity remain as relevant as ever.

"As for the ICRC's role, we evidently face huge challenges. But we remain committed to working to ensure those rules are known and respected by combatants on all sides."

The #GenevaConventions turn 70 today. Still protecting people from the worst of warfare.