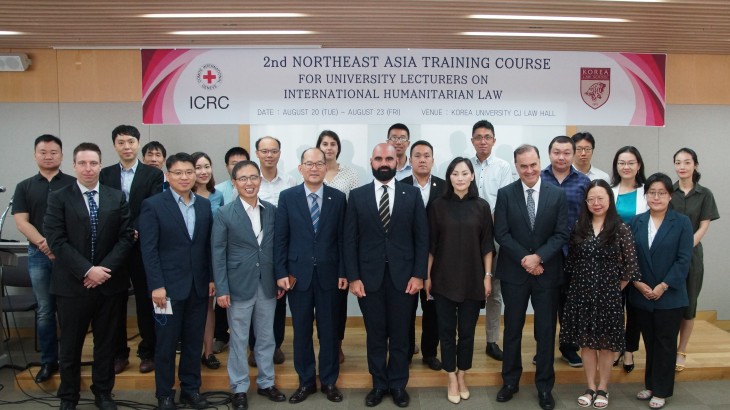 Around 25 professors and academics from universities in China, Mongolia, Japan and Korea came together for the 2nd Annual Northeast Asia Training Course for University Lecturers on International Humanitarian Law. Jointly organized by the International Committee of the Red Cross' (ICRC) mission in Seoul and the Korea University's School of Law, the course ran from 20 to 23 August in Seoul. The participants discussed topics ranging from classification of situations and personal scope of applying humanitarian law to digital developments and armed conflict, protection of cultural property in armed conflict and conduct of hostilities.

Opening the four-day event, Charles Sabga, head of mission in Seoul, thanked the participants for encouraging greater respect for humanitarian law in their spheres of influence by teaching and discussing it. "The ICRC highly values its collaboration with academia and other civil society actors, as it does with national authorities, the armed forces and National Societies the world over, in disseminating, promoting and developing humanitarian law together," he added. 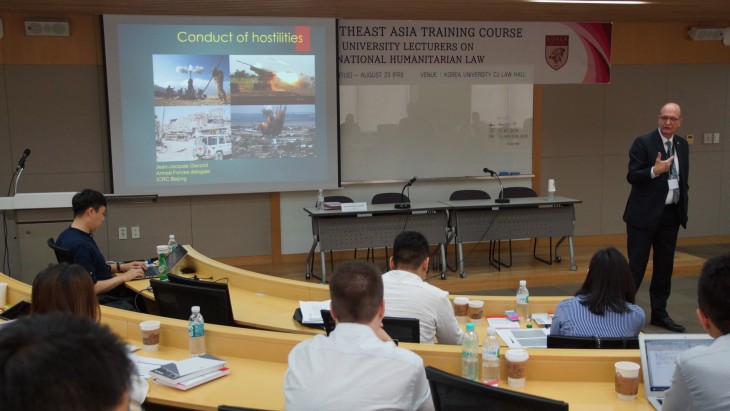 Jean-Jacques Gacond, the ICRC's armed forces delegate from the regional delegation for East Asia, talks about the rules of war.

Those leading the discussions included representatives from the Republic of Korea National Red Cross, International Institute of Humanitarian Law, Office of the High Commissioner for Human Rights (Seoul), Geneva Academy of IHL and Human Rights, president of the Assembly of States party to the statute of the International Criminal Court, renowned academics and representatives of the ICRC such as protection delegate, regional legal adviser for East Asia, armed forces delegate and legal adviser for Seoul mission. A special panel discussion on the topic related to people who go missing due to conflicts was led by professor Gabriella Citroni from School of Law, University of Milano-Bicocca and Dr Morris Tidball-Binz, forensic manager of the ICRC's Missing Persons Project.