South Sudan: 80 Wheelchair basketball players to face off in two-day tournament in Juba 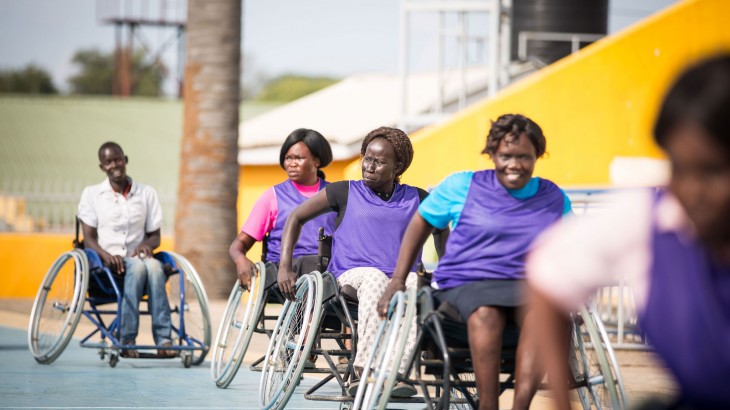 Juba, South Sudan (ICRC)—Eighty wheelchair basketball players, including—for the first time—15 women, from across South Sudan have gathered in Juba for three weeks of training led by two renowned coaches. It will end in a tournament on December 12-13.

Malat Wei, a South Sudanese-American wheelchair basketball player, travelled to Juba from the U.S. state of Arizona, where he plays university-level basketball. He will soon be joined by wheelchair basketball coach and the sport, disability, and inclusion advisor for the International Committee of the Red Cross (ICRC) Jess Markt.

"It is great to be back in Juba with so many talented and inspiring players," said Wei. "Wheelchair basketball was life-changing for me and it is an honour to share the sport that I love with others."

The training is the third of its kind and was co-organized by the ICRC and the South Sudan Wheelchair Basketball Association. The number of players participating more than doubled since 2018—a signal that the sport is growing in popularity in South Sudan.

"When I'm playing, I forget about my disability, I put all my heart in it because it's an opportunity to learn," said one of the players, Mary Hezekiah. "Nothing would be impossible for people with disabilities if we were given the right means, but we are seen as nobodies."

There are few services available in South Sudan for people living with disabilities and only three orthopedic centres in the country—all supported by the ICRC—where people can receive physical therapy and mobility devices, like prosthetics and wheelchairs.

"We see new patients every day at the orthocenters, many of whom suffered amputations because of a gunshot wound became infected," said James Reynolds, the head of delegation for the ICRC in South Sudan. "It is a stark reminder of how this conflict has irreversibly marked the lives of so many South Sudanese. We hope that this tournament helps to break the stigma and exclusion around disabilities."

Since the beginning of 2019, 730 people were admitted to ICRC's orthocentres in South Sudan—an average of almost two patients every day. Twenty-five percent of them had suffered an amputation.