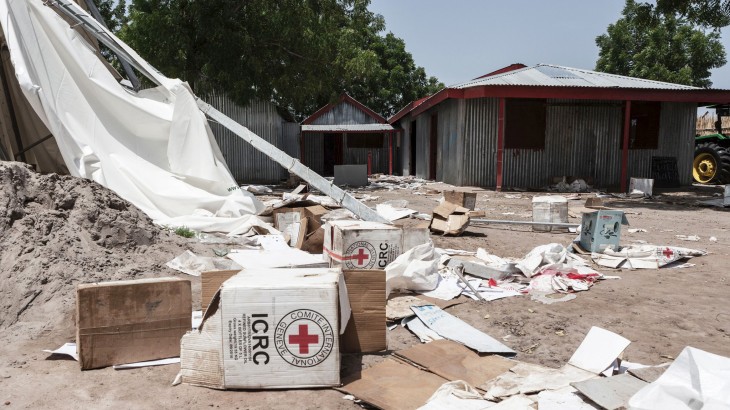 A looted ICRC base in Leer, South Sudan is seen in an archive photo from May 2015. On the 2nd and 3rd of October 2015, a new looting incident at a humanitarian compound in the same town, and threats against ICRC staff forced the organization to withdraw from Leer County. CC BY-NC-ND / ICRC / Pawel Krzysiek

Juba, 5 October 2015 - The International Committee of the Red Cross (ICRC) has been forced to withdraw all its staff from a humanitarian compound in Leer County, Unity State after it was looted and its aid workers threatened.

Dozens of well-organized armed men entered the compound over the weekend and stole equipment, medical supplies and money. Two ICRC vehicles were also taken. Staff, including ten ICRC workers, were threatened. The incident happened amidst intense fighting between armed groups.

"Our staff are trying to provide assistance to people who are in desperate need. Our main concern now is for the vulnerable population who are left with no access to humanitarian aid and who are at risk of being caught up in the fighting," said the head of ICRC in South Sudan, Jürg Eglin.

"These incidents against humanitarian organizations are unacceptable. They hamper our efforts to respond to people in need. We are in contact with all relevant civilian and military authorities from both sides to try to find out exactly what happened and why," said Mr Eglin.

In May 2015, the ICRC had to evacuate its former base in Leer due to deteriorating security conditions and had not been able to permanently return until September. A distribution of food was planned for October but the renewed clashes have prevented the ICRC from carrying out its activities. The ICRC will not resume operations in Leer County until security conditions improve and assurances are given from all relevant parties.

The ICRC strongly reminds all sides to respect the civilian population and civilian property. Under international humanitarian law, civilians and wounded must be spared and medical workers, medical facilities and humanitarian organizations must be allowed to carry out their duties in safety.