"I am no longer a happy woman. I fear I will never be happy again, as life is such a struggle," Vajda, a single mother of five, laments.

One year ago, Vajda had to flee her village in South Sudan with five young children. Her husband had been killed while getting food for the family, prompting Vajda to leave.

His death was one of thousands in the country since violence broke out in late 2013. The fighting has forced hundreds of thousands across the country to leave their homes, a flight for safety that has led to deep hunger needs.

"In my village, life used to be good," she said. Now, though, "the conflict has affected my whole life. My husband was a caring man. He was always working and helping us. Now everything depends on me."

Vajda spoke while sitting on the ground waiting for seeds, tools and food that the International Committee of the Red Cross (ICRC) is providing to 13,000 people in Rokon, central Equatoria.

Thousands of people have been forced to flee from their land and abandon their belongings in Equatoria, leaving them unable to cultivate the fertile land in the region.

Cyril Jaurena, the head of office for the ICRC in Equatoria, said that the people in this region are used to farming, but they don't have the opportunity to plant and cultivate crops now.

"By providing them with seeds and tools, we enable them to go back to farming. We also distribute rations of food so the families have something to eat before they can harvest the crops," Jaurena said.

Even though Vajda and her children are far from home, they have been given a piece of land by the host community to plant crops. "They understand that we did not come by choice," she said. 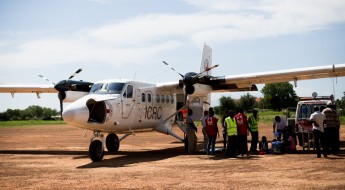