Sport helping to rehabilitate victims of war and armed violence 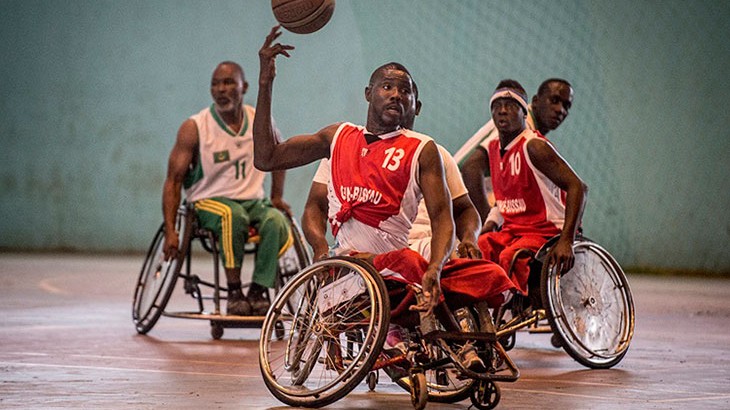 Guinea-Bissau team's wheelchair basketball player Tino Lopes (centre) is an example of triumph over challenge. He lost his leg movements as a child, faced prejudice and isolation, but found in sports a means to reintegrating himself. Sylvain Cherkaoui/Agência Cosmos - ICRC

Photographic exhibition and talks in Baixo Suíça show sport as an ally in the physical rehabilitation programme run by the International Committee of the Red Cross (ICRC).

Rio de Janeiro/ICRC – With new injuries, a lack of high-quality medical care and even the collapse of essential services, war and armed violence cause more people to have disabilities. They also aggravate the challenges facing people with a disability, who already have fewer economic opportunities – and, very often, health problems – to cope with. As another humanitarian response to the needs of these victims, the International Committee of the Red Cross (ICRC) therefore set up a physical rehabilitation programme. And in some of the centres where we run rehabilitation and integration projects, a key ally is sport.

Overcoming difficulties is something people with disabilities do every day, all over the world. As with athletes training for a competition, it takes great effort and dedication to learn to live with their condition. Very often they have to learn all over again how to do ordinary, everyday activities such as walking, or picking things up. They also have to deal with the psychological impact, and with society's preconceived ideas about people with disabilities.

Some of their success stories, of challenges met with the help of the ICRC, will be illustrated in a photo exhibition and talks given by ICRC professionals in Baixo Suíça, Lagoa Rodrigo de Freitas, starting on 9 September. Among those taking part in the event will be François Friedel, the head of the ICRC's physical rehabilitation project in Colombia.

"Sport is a key tool in promoting social inclusion for people with disabilities, because it helps change the community's perception of them. The focus shifts from their disabilities to their abilities", says Lorenzo Caraffi, ICRC Head of Delegation for Argentina, Brazil, Chile, Paraguay and Uruguay.

In 2015 the ICRC provided physical rehabilitation services for some 420,000 people in 47 countries, both directly and via the Special Fund for the Disabled. Around 2,500 of these people took part in sporting activities. Four athletes assisted by the ICRC programme in the Democratic Republic of Congo will take part in the Paralympics Games Rio 2016.

The ICRC promotes sport-related physical rehabilitation activities in Afghanistan, Bangladesh, Cambodia, Ethiopia, Gaza and India, and has set up partnerships with paralympic committees running projects in Iraq and Niger.

In most of the countries where the ICRC has launched rehabilitation projects, such services had previously been virtually non-existent, and in many cases the ICRC project laid the foundation for a national service. The organization is regarded as a leader in this field thanks to the wide range of its activities, its development of its own technology, its acknowledged expertise and its long-term commitment to the projects it supports.

Because it was hard to find materials giving the value for money necessary for sustaining large-scale projects in a range of countries, the ICRC began to develop and produce its own technology, using propylene. This type of plastic is mouldable, easy to dye, highly resistant, durable and recyclable – features that make it the ideal material for producing prostheses. The technology was tested by the International Society for Prosthetics and Orthotics, and has been adopted by other organizations that also provide this service.

Enabling people with disabilities in 2015: Facts and figures

In 2015 the ICRC provided physical rehabilitation services for 416,700 people in 47 countries, both directly and via the Special Fund for the Disabled.