Prosecutors play a crucial role in the enforcement of international humanitarian law (IHL), also known as the rules of armed conflict, through the prosecution of alleged perpetrators of war crimes. When prosecutors systematically prosecute IHL violations committed by all sides, victims of these violations are more likely to obtain justice.

In the Philippines, where three key IHL-related laws have been passed since 2010, awareness and familiarity with these laws remain a challenge among actors in the criminal justice system. As such, the ICRC supports them and their training institutions in strengthening their internal understanding and capacity with regard to IHL. This will improve the implementation of the following IHL laws: Republic Act No. 9851 or the “Philippine Act on Crimes Against International Humanitarian Law, Genocide and Other Crimes Against Humanity,” Republic Act No. 10530 or “The Red Cross and Other Emblems Act of 2013,” and Republic Act No. 11188 or the “Special Protection of Children in Situations of Armed Conflict Act.” 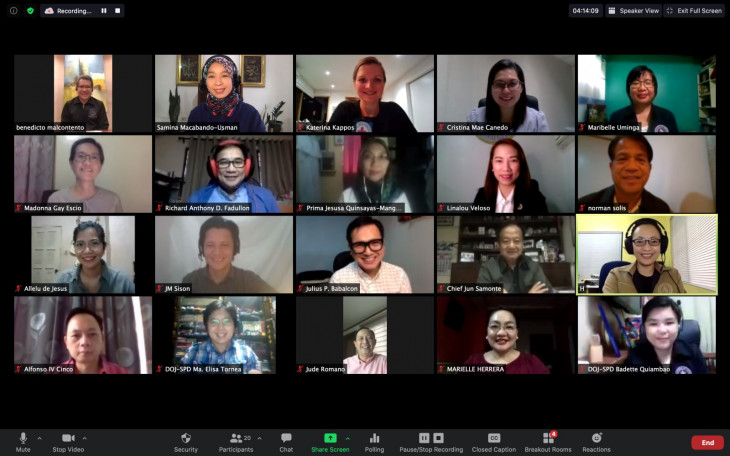 Passing on the knowledge. The 11 prosecutors will train their fellow prosecutors on IHL and related laws through a training module and course they will develop.

From 28 to 30 July 2020, the ICRC and the Department of Justice-National Prosecution Service (DOJ-NPS) held an intensive online “Training of Trainers” session for 11 state prosecutors. The DOJ-NPS serves as the government’s prosecution arm, which investigates crimes and prosecutes alleged offenders.

Even though the training was very “dense” (conducted via an online platform for three full days), participants showed enthusiasm and engagement from start to finish. Each presentation by ICRC and an external subject-matter expert was followed by a training activity, which included quizzes, group discussions and case studies. The case studies were aimed at giving the prosecutor-trainers some practical hands-on experience in analyzing and applying IHL-related domestic laws. The topics covered included fundamentals of IHL, principles that govern the conduct of hostilities, sources of IHL, classifying armed conflicts, RA 9851, RA 11188, and the work of the ICRC to operationalize IHL.

The training for prosecutors is part of that the ICRC’s ongoing efforts of building the IHL capacity of actors in the criminal justice system, including judges, prosecutors, public defenders, and members of the police and the military. Through a recently signed memorandum of understanding, the ICRC and the DOJ-NPS formalized their commitment to work together on a common goal: developing the capacity of prosecutors to know, implement and integrate IHL in the performance of their duties.

“When the violators of IHL are brought to court and are made to answer for their crimes, this may serve as a deterrent and would foster compliance with IHL. Given this, prosecutors should be properly capacitated to prosecute these cases to ensure that justice is properly administered,” said associate provincial prosecutor Julius Balbacon, from Samar. 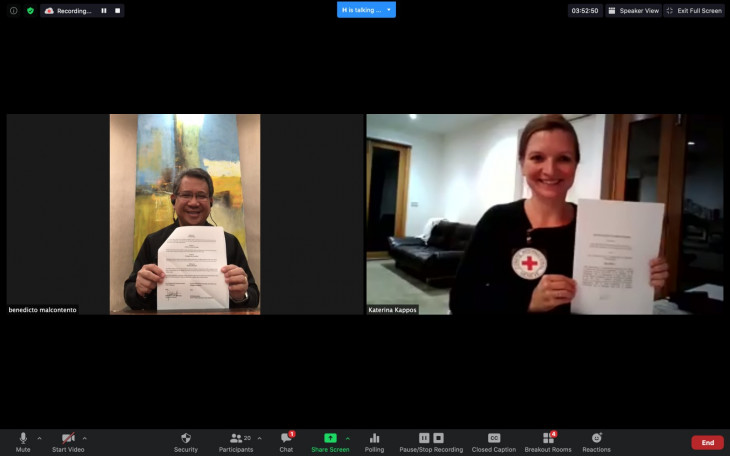 Prosecutor general Benedicto Malcontento and ICRC head of legal department Katerina Kappos sign the memorandum of understanding between the Department of Justice-National Prosecution Service and ICRC Philippines to officially establish cooperation between the two parties in building the capacity of the country's prosecutors through the development of a training course.

The 11 participants enhanced their knowledge about the basic and general principles, tenets, and concepts of IHL and related laws. During the next phase of this ICRC-supported project, they will form the DOJ-NPS’ pool of trainers who will design and develop a training course on IHL that will then be delivered to their fellow prosecutors across the country.

“Armed conflicts are reality even in this century. Prosecutors need to keep themselves abreast of the IHL as it is also evolving with the evolution and intricacies of armed conflicts. As long as there are people committing genocide, war crimes and crime against humanity, IHL will always be relevant,” said assistant state prosecutor Samina Macabando-Usman, of the Office of the Prosecutor General.

The trainers are expected to roll-out the new IHL training course by November 2020.